Lead poisoning is an increasing problem for wildlife and especially for bald eagles. When consumed, it can operate as a neurotoxin causing damage to the nervous system and blood disorders. In January, the Kansas State College of Veterinary Medicine received a sick bald eagle named Spar. See his road to recovery.

MANHATTAN — Thanks to diligent action by concerned landowners, local law enforcement, staff of the Milford Nature Center and veterinary intervention at Kansas State University, a bald eagle suffering from lead contamination is flying again over the Tuttle Creek River Pond near Manhattan.

"The eagle was brought to us on Jan. 11," said James Carpenter, professor of wildlife and zoological medicine at the Veterinary Health Center at Kansas State University. "It was depressed, emaciated, not eating and unable to fly. The prognosis for regaining its health appeared poor."

After the bird was admitted to the Veterinary Health Center, a physical examination and testing found it was suffering from lead poisoning. It was also determined that the eagle was a male around 4 1/2 years old.

Birds acquire lead poisoning most commonly by consuming dead animals that were shot by lead bullets or from other sources of lead contamination, according to Carpenter. He also said that lead toxicity is a common ailment in eagles, noting that one raptor center in Minnesota reported 25 percent of the eagles submitted there had toxic levels of lead in their blood.

Carpenter has many years of experience working with bald eagles. Before joining Kansas State University in 1989, he headed the U.S. Fish and Wildlife Service's Endangered Species Propagation Program at the Patuxent Wildlife Research Center in Maryland for 15 years. During this time, this program reintroduced 83 captive-produced eagles into the wild in 13 states.

"While I was at Patuxent, a severely debilitated eagle was brought to us and we diagnosed lead poisoning," Carpenter said. "That was the index case — the first case ever reported of lead poisoning in a bald eagle. So now, over 35 years later, we're still working on the same issue."

At the Veterinary Health Center, the eagle received the standard treatment protocols for lead toxicity: medication — a chelating agent — to reduce its lead levels and lots of intensive support care. The eagle's treatment also was an educational opportunity for the university's veterinary students. Carpenter was assisted on the case by Rob Browning, an exotic animal intern, along with three fourth-year veterinary students and a veterinary technician. The students named the bald eagle Spar.

After five days of treatment, Spar's condition improved and he was sent to the Kansas Department of Wildlife, Parks and Tourism's Milford Nature Center, northwest of Junction City, for rehabilitation.

Vanessa Avara, assistant director at the Milford Nature Center, said birds rehabilitating at the center first receive intensive care inside the building and then are taken outside to one of the center's specialized bird enclosures to get them used to the weather. The enclosures include a large flight pen. The birds are kept for several weeks while they build up muscle and strength so they can be released back into the wild, as Spar was.

Avara said most eagles brought to the center suffering from lead poisoning got it by eating fish that had ingested lead sinkers or eating deer that were shot with lead ammunition.

"A lot of people don't realize how much lead ammunition fragments when it hits a target," Avara said. "Fragments can go 17 inches from the entry point, and some of that is microscopic. It doesn't take much to poison a bird like an eagle — maybe two or three pieces the size of a BB can cause serious problems with one of those birds."

When the lead gets into the gastrointestinal tract of an eagle, it breaks down and is absorbed, Carpenter said.

"Once in the bloodstream, lead can affect numerous organs, resulting in clinical signs of disease, including neurologic signs," Carpenter said. "Most eagles with lead toxicity will die or, even if rescued, may be euthanized if they are profoundly ill."

Browning and his students visited Spar at the Milford Nature Center a few times and monitored the lead levels in his blood. Finally, at the end March, Spar was taken to Tuttle Creek where he was released.

"With every animal that we have come through rehab, release is our goal," Avara said. "It isn't always the outcome. To get that eagle out there is awesome because I have had two eagles die in my hands from lead poisoning in the last three months."

Carpenter agrees that Spar's recovery and release to the wild were important.

"I think it had a great impact on our students and others who viewed the release," Carpenter said. "We're really appreciative of the wildlife fund that we have at the Veterinary Health Center, which is a fund made possible by the financial contributions of private individuals who share our passion for wildlife. This fund paid for all the diagnostics and medications provided to this eagle. I'm just appreciative that my students and I could be involved and see the whole treatment and release process." 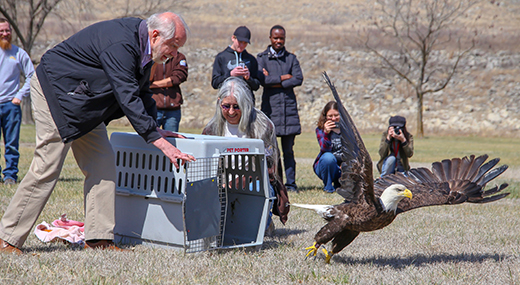 Spar, a bald eagle, is released back to the wild after successful treatment for lead poisoning at Kansas State University's Veterinary Health Center and a rehabilitation stay at the Milford Nature Center. | Download this photo.