Does microbial life exists on Mars? This $3.9 million, three-year-project funded by NASA's PSTAR program and including a Kansas State University researcher, will explore lava bed caves and tubes here on Earth in the hope of answering this question.

MANHATTAN — When lava flows down the slope of a volcano, it can leave behind an extreme environment ideal for unusual microbial life and potential clues to answering the life on Mars question.

Kansas State University geology professor Saugata Datta is one of the primary investigators of a new NASA study that will use a robotic vehicle to explore and collect data inside caves at Lava Beds National Monument in Northern California. The interiors of lava caves are home to bacterial films and coral-like mineral structures — called mineral biomarkers — that could help identify similar features that would provide evidence for extraterrestrial life on Mars or another planet.

"Humans have always had the idea that Mars has the progression of life," Datta said. "Studying delicate, extreme closed environments on Earth can give insight to the probabilities of finding more such features that relate to life and its presence on some extraterrestrial planetary surfaces."

The multi-institutional team of scientists and engineers recently received $3.9 million from NASA's Planetary Science and Technology for Analog Research program to support a three-year project in the lava caves. The team will use a four-wheeled rover, called CaveR, to explore the earthly lava caves and produce a detailed map of the inside of the caves. It will collect directed, high-magnification images to give the researchers information about the chemical makeup of the features on the cave walls. 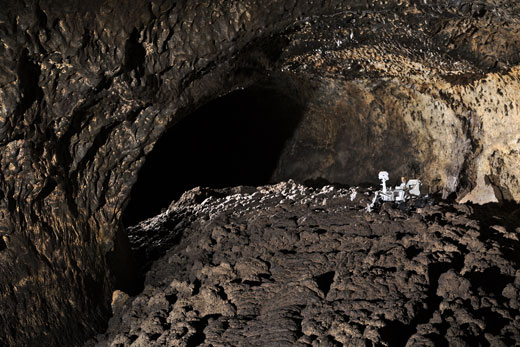 Researchers, including Kansas State University's Saugata Datta, are using a four-wheeled rover to explore accessibility inside caves. The rover also will deploy a NASA instrument that will determine how much water is on the cave walls. This instrument will be used in a future NASA mission to explore for ice on the dark side of the moon. Operations will be led from a surface-based mission command center a few miles away by a team of researchers who have not have been inside the cave. Photo credit: Project BRAILLE, Lava Beds National Monument, California. | Download this photo.


"Lava tubes and collapsed lava structures are quite common on the surface of Mars," Datta said. "Orbiter missions currently observing the red planet can see them. A terrestrial cave on Earth can be explored and really studied to its extreme end to understand such a situation or environment that can form on the surface of Mars."

According to Datta, the earthly lava caves are home to microbial life that thrive in the dark and interact with water dripping from the cave ceiling and seeping through cracks in the walls. By understanding Earth's caves, researchers can create preliminary findings to better detect any possible Marian biosignatures — evidence of past or present life — that may have been preserved in Mars' lava caves, which are better protected from the elements than areas on the surface.

"Caves could be the best place to look for evidence of life on Mars since they offer shelter from extreme surface conditions and have a relatively constant climate over geologic time," said Jennifer Blank, principal investigator of the project at NASA's Ames Research Center. "By understanding how evidence of microbial life is preserved in Earth's caves — specifically in these biomineral features that will last long after the microbes that helped make them are gone — scientists can be better prepared to detect possible Marian biosignatures that may have been preserved in Martian lava caves." 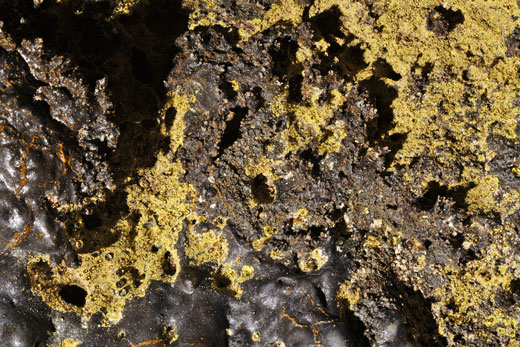 Roll over — or tap if on mobile — the image to see how the rover's technology can detect what a person's naked eye cannot. The original image shows a golden microbial mat forming on secondary minerals on the cave ceilings. The team is engaged in sampling the most interesting features like this that look like "biomarkers" and study the correlation between microbial life and minerals in the caves. Photos credit: Project BRAILLE, Lava Beds National Monument, California.


Datta's research will focus on the water, rock and soil chemistry in the caves and what it looks like from the rover's perspective when these three elements interact with each other to create biomass — living or once living material.

"Our intergraded approach will give us a big picture of the ecosystem of the cave," Datta said. "It will give us an idea of the type of microbial community that can live in a system with a certain temperature and moisture. There are so many extreme environments where microbial communities can occur. This is what we are targeting because Mars is an extreme environment." 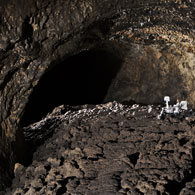 Kansas State University geologist Saugata Datta is part of a NASA study to explore microbial life in lava caves on Earth with a four-wheeled rover, which may lead to clues to whether there is life on Mars.
Photo credit: Project BRAILLE, Lava Beds National Monument, California.

A Kansas State University researcher is exploring lava caves on Earth as part of a $3.9 million NASA study, which may eventually be used to provide clues in answering the life on Mars question.

"Humans have always had the idea that Mars has the progression of life. Studying delicate, extreme closed environments on Earth can give insight to the probabilities of finding more such features that relate to life and its presence on some extraterrestrial planetary surfaces."