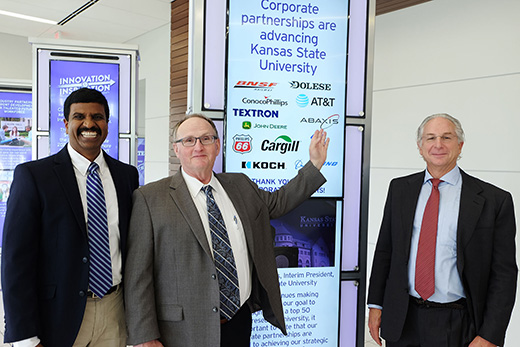 MANHATTAN — Steady support from a cutting-edge medical and veterinary technology company has now added up to $1 million for a key Kansas State University research center.

For each of the last four years, Abaxis has presented the university's Center of Excellence for Vector-Borne Diseases with a $250,000 gift.

An interdisciplinary research center in the College of Veterinary Medicine, the Center of Excellence for Vector-Borne Diseases' mission is to combat vector-borne diseases with a focus on pathogenesis, surveillance and disease prevention. The center director is Roman Ganta, professor of diagnostic medicine and pathobiology.

"Working with Roman is one of the great pleasures and honors of this job," said Ken Aron, chief technology officer at Abaxis. "The Center of Excellence for Vector-Borne Diseases is at the forefront of research on issues influenced by urban areas that are increasingly encroaching on animal habitats and can become unsuspecting starting points for vector-borne diseases. It is a privilege to be in the position to support the work of someone like him."

Additionally, Ganta identified a project for developing axenic, or cell-free, media growth of Ehrlichia and Anaplasma species pathogens. He said the Abaxis gift also provided matching-fund support for a Kansas State University National Bio and Agro-defense Facility transition fund grant that is focused on vaccine development and a pathogenesis study to prevent a foreign animal disease: heartwater, which is caused by Ehrlichia ruminantium.

"Just as important, these funds are invested in promoting graduate education focused on vector-borne diseases," Ganta said. "Our future goals for the foundation fund will be similarly allotted as indicated above and when we find a strategic need to enhance our progress in developing new projects. In particular, we allot these funds for generating preliminary data leading up to publications and additional extramural funding, similar to what we have achieved during the last three years."

To continue to facilitate this successful partnership for the Center of Excellence for Vector-Borne Diseases and Abaxis, the KSU Foundation has provided significant assistance in its role as Kansas State University's strategic partner for philanthropy.