MANHATTAN — The secret to stopping some viruses from making people sick might be hidden in red wine and chocolate — but that doesn't mean having more bonbons and vino is in order, Kansas State University researchers say.

"Resveratrol is a small, natural compound in many plants like grapes, cocoa beans, peanuts and blueberries," said Shuai Cao, postdoctoral researcher studying the effects of resveratrol on viruses. "Our recent study found that high concentrations of resveratrol — higher than anything you may find in food naturally — prevent poxviruses from replicating in human cells."

Cao; Anil Pant, doctoral student in biology Nepal; Zhilong Yang, assistant professor of biology; and their collaborators at the Centers for Disease Control and Prevention have published "Suppression of Poxvirus Replication by Resveratrol" in Frontiers in Microbiology.

"Resveratrol can be chemically synthesized or extracted from fruits," Pant said. "Our research may be a steppingstone to using resveratrol as a complementary treatment for viruses during a time of growing concern over drug resistance."

The researchers added resveratrol at varying intensities to human cell cultures infected by vaccinia virus, a cousin to the highly dangerous variola virus that causes smallpox. Used as the vaccine to eradicate smallpox, vaccinia virus provides a good model of how viruses work without the danger, Cao said. The cell cultures with high levels of resveratrol prevented vaccinia from replicating in the early stages of the viral infection, which stops the virus from spreading.

"In order for a poxvirus to infect a host, it has to first enter a cell and make a lot of copies of its genome inside the host cell," Pant said. "Our research has shown that resveratrol inhibits vaccinia virus from making copies of its DNA and genome."

The Kansas State University researchers recorded resveratrol's success with vaccinia and collaborated with researchers at the CDC to perform similar experiments with monkeypox, a contagious and deadly virus to humans that has caused periodic disease outbreaks in Africa. Resveratrol had the same effect with monkeypox, which means that it has a good chance of inhibiting all poxviruses, Cao said.

"There are many poxviruses that infect many species and they share similar mechanisms to replicate their DNA," Cao said. "Resveratrol works to inhibit replication in two of them — the vaccinia virus and monkeypox — so it should be able to inhibit other poxviruses as well."

Vaccinia is not only ideal for labs to study as a model virus, but it also is used to help treat cancer and to fight other viruses, such as its role in the eradication of smallpox around 1980.

"Although smallpox was eradicated, several other poxviruses are still medically relevant," Pant said. "Many of the viruses can cause significant loss — economic or healthwise — but vaccinia can be used for good such as a gene carrier in gene therapy and cancer treatment." 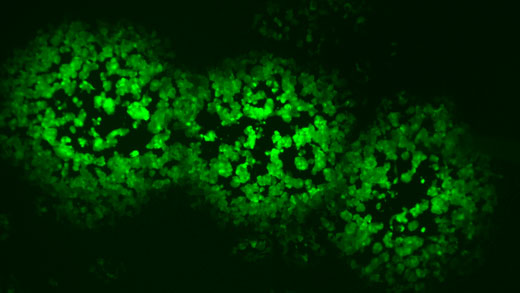 Poxvirus, which produces a green fluorescent protein, can replicate quickly in human cells unless resveratrol, a compound found naturally in many foods, is present, according to a study by researchers at Kansas State University and Centers for Disease Control and Prevention. | Download this photo.

In high concentrations, resveratrol, a compound in red wine and chocolate, stops poxviruses from replicating, according to study published in Frontiers in Microbiology.

"Our recent study found that high concentrations of resveratrol — higher than anything you may find in food naturally — prevents poxviruses from replicating in human cells."