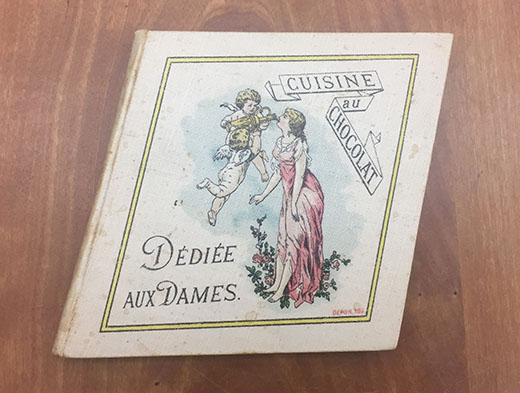 The Morse Department of Special Collections at K-State Libraries recently acquired "Cuisine au Chocolat: utile, dulci." This is the only known copy in the United States. | Download this photo.

MANHATTAN — Most cookbooks are stored in a kitchen cupboard or on a pantry shelf, maybe even covered in a sprinkling of flour. But in K-State Libraries' Richard L. D. & Marjorie J. Morse Department of Special Collections at Kansas State University, more than 38,000 cookbooks and manuscripts are preserved in a secure, climate-controlled environment.

Rather than serving as quick reference books for home cooks, these cookbooks act as invaluable resources for researchers from around the globe.

"Cuisine au Chocolat: utile, dulci," a small first-edition cookbook from 1885, was created during a pivotal era in the history of chocolate production. Its format is highly unusual: It's shaped like a parallelogram rather than a square or rectangle.

"This tiny promotional cookbook was produced by Suchard, one of the great 19th-century Swiss chocolate companies that pioneered chocolate production on a large scale," said Roger Adams, rare books librarian. "It is exceedingly rare; not only because there is no other known copy in the United States, but also because we just don't see cookbooks shaped like this. An unusually shaped cover is usually found on an art book, not on a cookbook that was meant to be actively used."

The second acquisition is an untitled two-volume set of Austrian manuscript cookbooks from about 1790. It was written in German by an anonymous chef who packed nearly 400 pages with recipes of all kinds.

"Handwritten cookbooks reveal details about their writers and the place and time in which they lived that you don't see in a published work," Adams said. "In that way, they are like a diary. They're a very personal, private item. In 18th-century Europe, a chef's recipes would have been highly guarded, almost like trade secrets."

This set of manuscript cookbooks originated in Vienna, one of the centers of European culture at the time and home to composers such as Wolfgang Mozart and Joseph Haydn. Based on the complexity of the recipes, Adams said that he has little doubt that the chef worked in a household that had not only means and money, but also public importance.

"I wouldn't be surprised to learn that this chef worked for someone who was a prominent member of the royal court of the Holy Roman Empire," Adams said. "Once it's translated into English, we expect to find more clues about this household."

Keli Rylance, head of special collections, says that while the stories behind these objects are fascinating, when she and her colleagues consider which items to add to the collection, they go beyond looking for something that is unique or rare.

"We prioritize the teaching and research needs of K-State's faculty," Rylance said. "These acquisitions are perfect examples of books around which professors might build an original, rewarding learning experience for their students."

In fact, Kathleen Antonioli, assistant professor of French, will use "Cuisine au Chocolat" in her classroom in fall 2018. Her students will translate the book from French to English and attempt to recreate some of its featured recipes.

Adams said that Antonioli's use of the book in her classroom illustrates how the university's libraries are not hiding materials away from the public when they buy rare books from a dealer.

"On the contrary, we're opening up access to a very wide audience," he said. "In the future, we hope to give the public even more access to our manuscript cookbook collection by digitizing it and putting the files online. Really, it's something of a miracle that these manuscript cookbooks survived 200 years. Our role is to make sure they survive for another 200 years and reach as large of audience as they possibly can."

The university's librarians regularly buy and receive donated materials to grow the collection. They purchased these two items with funds from an endowment that was established through the generosity of private donors and a matching grant from the National Endowment for the Humanities.

For more information about the cookery collection, contact special collections at libsc@k-state.edu or 785-532-7456. 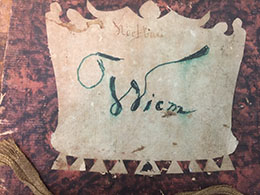 Both volumes of this 18th-century handwritten cookbook by an anonymous chef feature the city of its origin written in German on the cover: "Wien," or Vienna.

"These acquisitions are perfect examples of books around which professors might build an original, rewarding learning experience for their students."