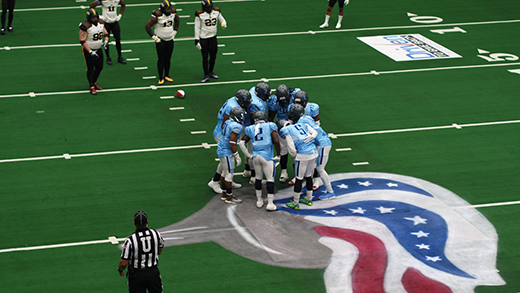 An unmanned aircraft flown by a staff pilot from Kansas State Polytechnic's Applied Aviation Research Center captures professional indoor football team Salina Liberty in a huddle at a game on March 3 against the Wichita Force. | Download this photo.

SALINA — The Kansas State University Polytechnic Campus is expanding its unmanned aircraft systems capabilities to now include sports and entertainment operations with the help of a professional indoor football team.

The campus's Applied Aviation Research Center, which is a hub for UAS exploration, is collaborating with the Salina Liberty to bring drone technology to the team's home games this season. The research center is using unmanned aircraft to perform a 35-foot ball drop to the head referee before opening kickoff as well as capture aerial footage of the games to livestream on the team's Facebook page. The unmanned flights are taking place at Tony's Pizza Events Center — where the Salina Liberty play — during six home games from March 3 through May 26.

"A mission like this is well within the realm of our expertise, but we've actually never had the opportunity to implement UAS for a sports application, so we're thrilled to be teaming up with the Salina Liberty," said Travis Balthazor, flight operations manager of Kansas State Polytechnic's Applied Aviation Research Center. "This new venture allows us to support a local organization and continue to bring the innovation of unmanned aircraft to our community while being able to diversify our skills and grow the services we offer."

"We see drones as a way to enhance the in-game experience for the fans, giving them a unique view of the action on the field, so we're excited that Kansas State Polytechnic was so receptive to the idea," said Ricky Bertz , Salina Liberty CEO and co-owner. "This could also set a trend among other teams in our league and even within the sports industry, so we're thankful to be pioneering the initiative with one of the best drone programs in the country."

The concept of using an unmanned aircraft to release the game ball to the referee was inspired by one of the challenges in the NFL's Pro Bowl Skills Showdown called drone drop. However, having the ability to fly a drone during the Salina Liberty's games and capture the action live isn't something Kansas State Polytechnic's Applied Aviation Research Center is widely replicating. Currently, the FAA does not allow unmanned operations over a large assembly of people outdoors, which is why, along with a no-fly zone, drones are generally prohibited at sports stadiums. Because the Salina Liberty is an indoor football team, the research center is able to fly beyond the FAA's rules for the national airspace system.

To keep safety at the forefront, the research center is partially maintaining the FAA's guideline on operations over a crowd, deciding only to fly UAS above the field where the players are wearing protective gear and the teams, coaches and referees have knowledge of the activity. A concept of operations, or stringent flight plan, has been developed to address the aircraft's lack of GPS indoors and includes both a remote pilot in command and a visual observer at the games. In addition, research center staff members and students involved in the project conducted several training sessions on campus and in the arena prior to the start of the season.

Balthazor believes this attention to detail and cautious approach might help Kansas State Polytechnic's Applied Aviation Research Center build a safety case that could be presented to the FAA about expanding its UAS flight operations to large outdoor sporting events.

"The long-term benefit of flying unmanned aircraft at the Salina Liberty games is the opportunities it could create down the road for athletic teams," Balthazor said. "When we combine a strong concept of operations with numerous flights near crowds and few to no errors, we have the potential to prove to the FAA that these types of operations also can be performed safely and successfully outside."

The next game that the Applied Aviation Research Center is performing UAS flight operations will be at 6:30 p.m. Saturday, March 17, when the Salina Liberty will face the Bismarck Bucks.