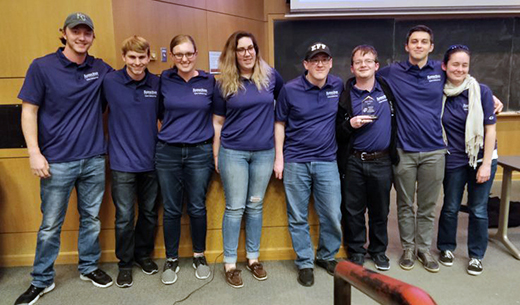 Competing against 20 teams from 16 schools across the U.S., students were faced with situations designed to simulate real-world information technology, choosing where and when to best tradeoff between security and usability.

Cyber defense competitions are hosted annually to allow students studying the various areas of information assurance to test their skills. Competitors form blue teams, four to eight students from a university or institution, and are tasked with providing a variety of services to their network such as websites, email, remote desktop, programming environments and backup services. The student teams have about three weeks to secure all of their services and prepare their networks for the onsite event.

At the competition, a red team, made up of security professionals from industry as well as graduate students from Iowa State's information assurance program, was brought in for an eight hour "attack phase," with the task of trying to hack into the blue teams' systems and steal "flags." If a blue team has one of its flags stolen, it loses points.

Blue teams not only have to keep out the red team, but also must provide easy-to-use services for a green team, which acts as an end user of the blue teams' services. Green team members attempt to log on to blue teams' systems, use their email accounts, browse their websites and more, all while awarding points based on the end-user experience

The competition pits the industry's best against some of the most talented students in the Midwest. Employers have grown to expect quality hires from the student competitors, with alumni of the event going on to work at locations such as WebFilings, Boeing, Microsoft, Lockheed-Martin, Rockwell Collins, Google, Facebook, Amazon and nearly every federal agency.

From out of state: and Calvin Bailey, junior in computer science, Raymore, Missouri.

Faculty adviser is Eugene Vasserman, associate professor in computer science, in the College of Engineering at Kansas State.