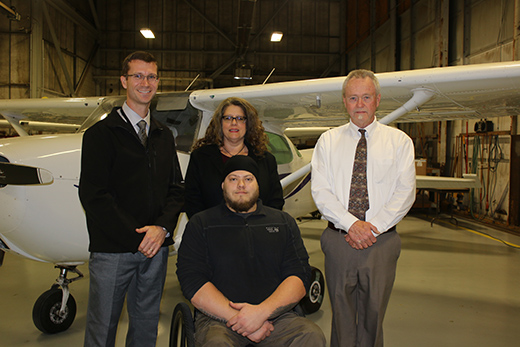 Jacob Cowart, center, with, from left, Daniel Orpin, Federal Aviation Administration; Laura Cowart, Cowart's mother; and Jim Crisp, Federal Aviation Administration. All played an integral part in the approval process of a hand control installation in a Kansas State Polytechnic airplane, making it possible for Cowart to learn how to fly and earn his degree. | Download this photo.

SALINA — When Kansas State University Polytechnic student Jacob Cowart was 12 years old, he went to a flight camp where he was able to take the controls and fly. After that, he was hooked on flying.

But the process of piloting an airplane is not easy for Cowart, who has been wheelchair-bound most of his life. Airplanes are not typically equipped with the necessary equipment to allow for operation via hand control, which attaches to the rudder pedals in the airplane and provides the pilot the ability to maneuver and control the aircraft rudder and brakes. According to Federal Aviation Administration rules, installing a hand control to operate an aircraft is a major alteration, which requires careful overview and inspection by an aviation safety inspector with the agency and can include test flights as well

Installation of the hand control also requires a supplement to the aircraft flight manual, which must always be on board the airplane.

Despite all the regulations, Cowart would not be deterred from his goal of learning to fly an airplane. A sophomore in unmanned aircraft systems flight and operations from Horton, he persevered through the process, determined to achieve his dream. Cowart worked with the Kansas State Polytechnic aviation maintenance department; Daniel Orpin, an FAA front line manager; and Jim Crisp, an FAA aviation safety inspector who was assigned to the project — his last before retiring — to get a hand control installed in the Cessna 172 in Kansas State Polytechnic's aircraft fleet.

"There was a need for this device in this situation, and we found a way," Crisp said. "I am so happy we were able to get him into an airplane and provide the ability to learn to fly. We were able to help make it possible for him to achieve his dreams. Nothing is better than that."

With the hand control now in place, Cowart will begin flying this summer and work toward his flight ratings. But it hasn't been easy. Hand controls can be hard to find.

Union Aviation Hand Controls, a hand control similar to the one installed Kansas State Polytechnic's Cessna 172, are no longer manufactured. Often, the only way to obtain a hand control is to purchase an older device from an individual or estate. But the individual who currently owns the supplemental type certificate for Union Aviation Hand Controls is in the process of raising funds to once again begin manufacturing the device.

"The opportunity to learn to fly and the ability to achieve these credentials will open up future job opportunities," Cowart said. "It's rewarding to be able to get up there and fly. It's really a dream come true."