MANHATTAN — Penelope "Penny" Muse Abernathy, a former executive at The Wall Street Journal and The New York Times and Knight chair in journalism and digital media economics at the University of North Carolina, will deliver the 18th annual Huck Boyd Lecture in Community Media on April 11.

Her lecture, "Saving community journalism from the rising threat of news deserts," will be at 9:30 a.m. Wednesday, April 11, at the K-State Alumni Center Ballroom. The lecture is free and open to the public.

At 10:30 a.m., she also will participate in a panel discussion, "Silent 'Signal': Baldwin City adjusts to life without a newspaper." Other panelists will be Jay Wachs, founder of Briar Cliff Media in Lawrence and entrepreneur behind Baldwin City Radio, and Jeannette Blackmar, executive director of the Baldwin City Chamber of Commerce. Steve Smethers, associate professor of journalism and mass communications, will moderate. The panel is also free and open to the public.

Kyle Bauer, owner and general manager of KCLY-FM and KFRM-AM in Clay Center, and Chris Walker, publisher of The Emporia Gazette, will be honored as Huck Boyd Community Journalists of the Year at the luncheon following the panel discussion. These awards are given by the Huck Boyd National Center for Community Media and the Huck Boyd National Institute for Rural Development.

Abernathy's lecture, the panel discussion and the luncheon are sponsored by the Huck Boyd National Center for Community Media in the A.Q. Miller School of Journalism and Mass Communications.

"McDill 'Huck' Boyd was a great believer in preserving small towns and small-town media, and this lecture series in his name helps highlight the importance of community journalism in Kansas and across the nation," said Gloria Freeland, director of the center and assistant professor of journalism and mass communications.

Abernathy, a journalism professional with more than 30 years of experience as a reporter, editor and senior media business executive, specializes in preserving quality journalism by helping the news business succeed economically in the digital environment. Her book, "Saving Community Journalism: The Path to Profitability," published in 2014, is based on five years of research, involving more than two dozen newspapers around the country. This research became the foundation for the University of North Carolina's Center for Innovation and Sustainability in Local Media, which works with news organizations to investigate and develop new business models and tools.

Jean Folkerts, interim director of the A.Q. Miller School of Journalism and Mass Communications at Kansas State University, said she is familiar with Abernathy's work and with the effective way that she has connected with publishers in North Carolina.

"Abernathy has involved students in studying audiences and in helping publishers address real concerns," Folkerts said. "We are looking forward to her presentation and expect we will learn new ways of implementing initiatives with the Huck Boyd National Center for Community Media."

Most recently, Abernathy was the author of a major report, "The Rise of a New Media Baron and the Emerging Threat of News Deserts."

As a senior executive, Abernathy was responsible for creating and implementing strategies at some of the nation's most prominent news organizations and publishing companies, including the Harvard Business Review, as well as The Journal and The Times. She oversaw the successful launch of new multimedia enterprises that increased both revenue and profit at all three organizations. She also served as vice president and executive director of industry programs at the Paley Center for Media, which counts as its members some of the world's leading media companies and executives.

Before moving to the business side of the industry, Abernathy was a newspaper reporter and editor at several daily newspapers, including The Charlotte Observer, The Dallas Times-Herald and The Wichita Eagle-Beacon. She was inducted into the North Carolina Journalism Hall of Fame in 1998. She has an MBA and a Master of Science from Columbia University and a Bachelor of Arts from the University of North Carolina, Greensboro.

To become a patron of the Huck Boyd Lecture in Community Media series or for information about luncheon tickets, please contact Gloria Freeland at gfreela@k-state.edu. 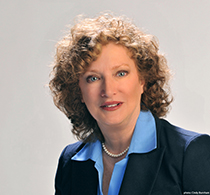