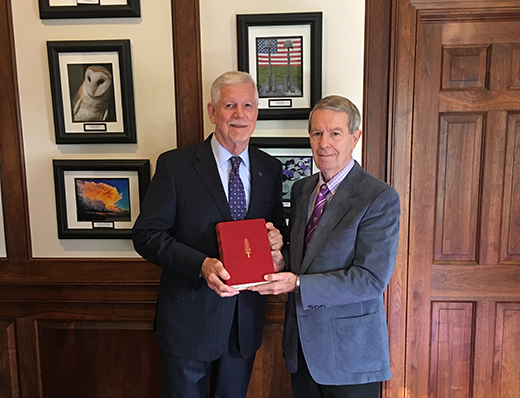 MANHATTAN — It's a story of presidents, generals and love of alma mater represented by one very historic volume.

Kansas State University alumnus and donor Richard D. Rees has presented a special book by Dwight D. Eisenhower to Kansas State University, K-State Libraries and the university's president and first lady, Richard and Mary Jo Myers. Rees made the gift in memory of his late parents, Leonard and Beatrice Rees, who were K-Staters.

Eisenhower wrote "Crusade in Europe" in 1948, a few years before he was elected president. Only 1,426 copies of the book were printed, with the first 25 copies bound in leather with a slipcase reserved for Eisenhower to give to family and friends. The volume Rees gifted has a tremendous importance to Kansas State University: It is No. 7 and is the copy Eisenhower presented to Milton Eisenhower, his youngest brother and the president of the university from 1943-1950.

Inside the book, which is now part of K-State Libraries' Richard L. D. and Marjorie J. Morse Department of Special Collections, Eisenhower wrote: "For Milton and Helen — In the realization that if I could have had the help of Milton in preparing this work its value, if any, would have been multiplied for every reader. With lasting devotion and affection from their brother. Ike."

"It's an extraordinary thing to hold this volume in one's hands and realize that the last time it was on this campus, it was likely in the same home that President Myers now lives in," said Cliff Hight, university archivist.

In addition to the book's provenance as a volume from Milton Eisenhower's personal library, its military subject matter and connection to Abilene also make the gift a meaningful one. "Crusade in Europe" chronicles Dwight Eisenhower's experiences in World War II, where the five-star general served as the supreme commander of the Allied expeditionary forces. Myers also enjoyed a distinguished military career as a four-star Air Force general and chairman of the Joint Chiefs of Staff. Rees' parents and Mary Jo Myers are all from Abilene, the Eisenhowers' hometown. And finally, Richard Myers and Milton Eisenhower are the only Kansas State University alumni to serve as presidents of the university.

Rees, who was born in Manhattan and earned degrees from Kansas State University in 1961 and 1964, acquired the book from a rare books dealer in Pennsylvania. While presenting the book in President Myers' office, Rees said, 'When I learned that the book had been in the possession of K-State's ninth president, I was determined to return the book to its original home."

Besides the book, Rees has made many gifts to the university, including other gifts to K-State Libraries and to the Historic Costume and Textile Museum in the College of Human Ecology, in memory of his late wife, Janet, who died in 2010.

"This book has such significance to Kansas State University," Myers said. "On behalf of the university, I thank Dick for this incredibly thoughtful gift. It's an irreplaceable treasure."