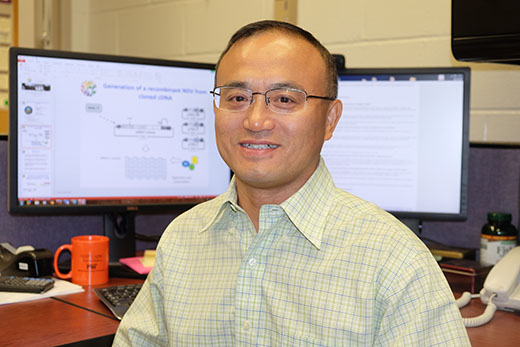 Wenjun Ma, associate professor of diagnostic medicine and pathobiology at Kansas State University, will use a more than $2 million grant from the National Institutes of Health to study bat influenza A-like viruses. | Download this photo.

MANHATTAN —Bats aren't only a threat for carrying rabies. These tiny, flying mammals are known to spread more than 60 different diseases, including influenza.

With help from a grant of $2,046,511 from the National Institutes of Health, a Kansas State University veterinary researcher will look at ways to curtail the influenza threat from bats.

"Influenza pandemics are typically caused by the emergence of novel influenza A viruses, which transmit efficiently within human populations that lack preexisting immunity," said Wenjun Ma, associate professor of diagnostic medicine and pathobiology at the university's College of Veterinary Medicine. Ma said that genome sequencing has been used to discover new viruses in bats that are now named as bat influenza A-like viruses, or BIALVs.

"Concerns were raised that these novel BIALVs — HL17NL10 and HL18NL11 — may pose significant spillover threats to humans," Ma said. "This is because antibodies to influenza A viruses and influenza B viruses have no cross-reactivity to novel BIALVs. To understand these novel viruses, reverse genetics have been established for both viruses."

"Recent studies have shown that rescued BIALVs can infect canine and human cells," Ma said. "All facts suggest a zoonotic potential of novel bat viruses. However, little is known about the receptors of these novel viruses, infection and immunological responses in their natural hosts — bats — or how they are maintained and transmitted among their natural hosts."

Ma will try to address these important questions and his project also will study whether bats can be infected by influenza A viruses, and if they are infected, what role in the ecology of influenza A virus do these infections play.

"Significant knowledge is needed to understand these novel viruses and their potential as threats to other species, including humans," Ma said.

Ma hopes the results from his work will provide new insight into the biology and virology of novel bat influenza A-like viruses, reveal the association of identified viral sequences with bats, identify roles that bats may play in virus ecology, and address concerns regarding their potential threats to other species, including humans.