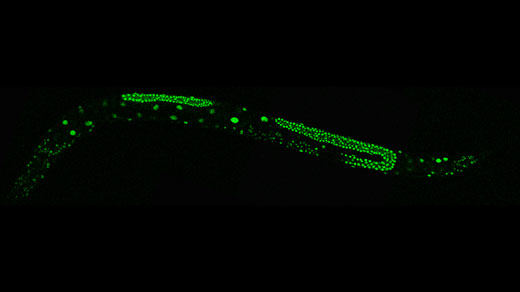 MANHATTAN — A teeny, tiny worm and a $1.8 million National Institutes of Health grant may help a Kansas State University researcher understand how the smallest molecules can have big effects on gene expression.

Using microscopic worms as a model system, Anna Zinovyeva, assistant professor in the Division of Biology, is researching how small bits of non-coding RNA, called microRNAs, decrease gene activity in animals. The National Institute of General Medical Sciences awarded Zinovyeva with a Maximizing Investigators' Research Award for New and Early Stage Investigators because her research might lead to breakthroughs in human health research.

"Cardiovascular disease, neurodegenerative diseases, metabolic disorders and cancers all have underlying disruptions in gene expression," Zinovyeva said. "Some genes might be too active and some genes are not active enough. Tiny molecules called microRNAs are one way cells regulate gene expression."

MicroRNAs, about 22 nucleotides long and initially shaped like a hairpin, are found in plants, animals and some viruses. According to Zinovyeva, it is thought that these tiny strands of RNA regulate about half of animal genes, including those in the microscopic worm, called Caenorhabditis elegans, used for the study. Zinovyeva said there are more than 100 microRNAs in C. elegans and about 1,000 in humans. Each one could regulate expression of hundreds of genes.

"C. elegans is a great genetic model system that allows us to study how microRNA activity is regulated," Zinovyeva said. "Basic experiments are easier and faster with C. elegans because their lifespan from egg to reproductive age is about three days. Yet because microRNAs in C. elegans are very similar in humans, what we learn can be very much applicable to human biology and health."

According to the NIH, the award provides promising investigators with stable funding and research flexibility to increase productivity and chances for research breakthroughs. Since the grant's stipulations are flexible, it will give Zinovyeva's lab group the opportunity to explore exciting new leads in microRNA regulatory activity.

"This award gives researchers freedom to follow new and thrilling directions so I'm excited about that," Zinovyeva said. "The grant will allow me to recruit more talented graduate students and postdocs to the lab and support the lab with equipment and supplies as we follow the research where it leads us."

Using the worms, Zinovyeva said she hopes to understand the molecular details of how microRNA production and activity is regulated.

"We are very much in the beginning stages of trying to understand the basic mechanism of this process," Zinovyeva said. "Our hope is that the insights we gain will, in the future, contribute to development of therapeutic tools that can fix disturbances in gene expression."

Zinovyeva is Zee no vee vah 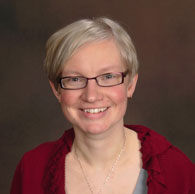 Anna Zinovyeva, assistant professor in the Division of Biology, is researching small bits of non-coding RNA, called microRNAs, in a microscopic worm, calledC. elegans, with help from a $1.8 million NIH grant.