Research creates way to protect pigs from PRRS during reproduction

Raymond "Bob" Rowland, Kansas State University professor of diagnostic medicine and pathobiology in the College of Veterinary Medicine, has created a way to protect swine offspring from the devastating PRRS virus during reproduction.

MANHATTAN — In the words of Kansas State University researcher Raymond "Bob" Rowland, his latest work is helping to eradicate a devastating swine disease.

The disease is caused by the porcine reproductive and respiratory syndrome, or PRRS, virus. The virus costs the U.S. pork industry more than $600 million in losses every year.

In his latest study, Rowland, professor of diagnostic medicine and pathobiology in the College of Veterinary Medicine, has created a way to protect offspring from the PRRS virus during pregnancy. He has found that mothers without the CD163 protein are resistant to the PRRS virus and give birth to healthy, normal piglets. The work appears in Nature's Scientific Reports.

"We have created a protective shell against the PRRS virus during the reproductive phase of production," Rowland said. "The offspring does not become infected during pregnancy and is born a healthy piglet. During this critical phase of production, we have essentially ended a disease."

The PRRS virus causes disease in two forms: a respiratory form that weakens young pigs' ability to breathe and a more severe reproductive form that causes mass deaths in pigs during late pregnancy.

"The reproductive form not only has a tremendous economic impact, but also a psychological impact on people who work with pigs," said Rowland, who has spent more than 20 years studying the PRRS virus. "When we look at ways to control this disease, it really begins with reproduction. We want to keep this disease out of the reproductive process and we have found a way to do that."

To address the devastating reproductive form of the virus, Rowland collaborated with Randall Prather, a professor at the University of Missouri, and a team to develop PRRS-resistant pigs. Using CRISPR/Cas9 technology, the researchers found that pigs without the CD163 protein showed no signs or evidence of being infected with the PRRS virus. CD163 is the receptor for the virus.

The research can save swine producers millions of dollars because pigs are protected from the PRRS virus during the critical reproductive process, Rowland said. But because offspring are born normal, they may still be susceptible to the disease later in life.

"This is one tool that we can use," Rowland said. "It doesn't mean that we can give up on vaccines or diagnostics, but it does create more opportunities for other tools to become more effective. Because this pig is born healthy, it will respond better to a vaccine or a diagnostic test. We are enhancing other aspects of disease control as well."

Rowland will present the research for the first time at the 2017 North American PRRS Symposium from Dec. 1-3 in Chicago.

Other Kansas State University researchers involved in the project include Maureen Kerrigan, laboratory research manager, and Luca Popescu, a doctoral student and research assistant. All the researchers are involved with the diagnostic medicine and pathobiology department. 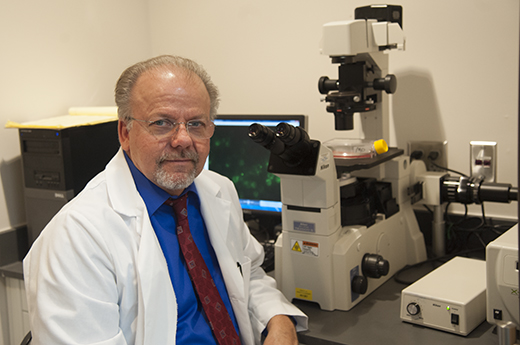 Raymond "Bob" Rowland, Kansas State University professor of diagnostic medicine and pathobiology in the College of Veterinary Medicine, has created a way to protect swine offspring from the devastating PRRS virus during reproduction. | Download this photo. 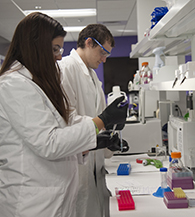 "We have created a protective shell against the PRRS virus during the reproductive phase of production."