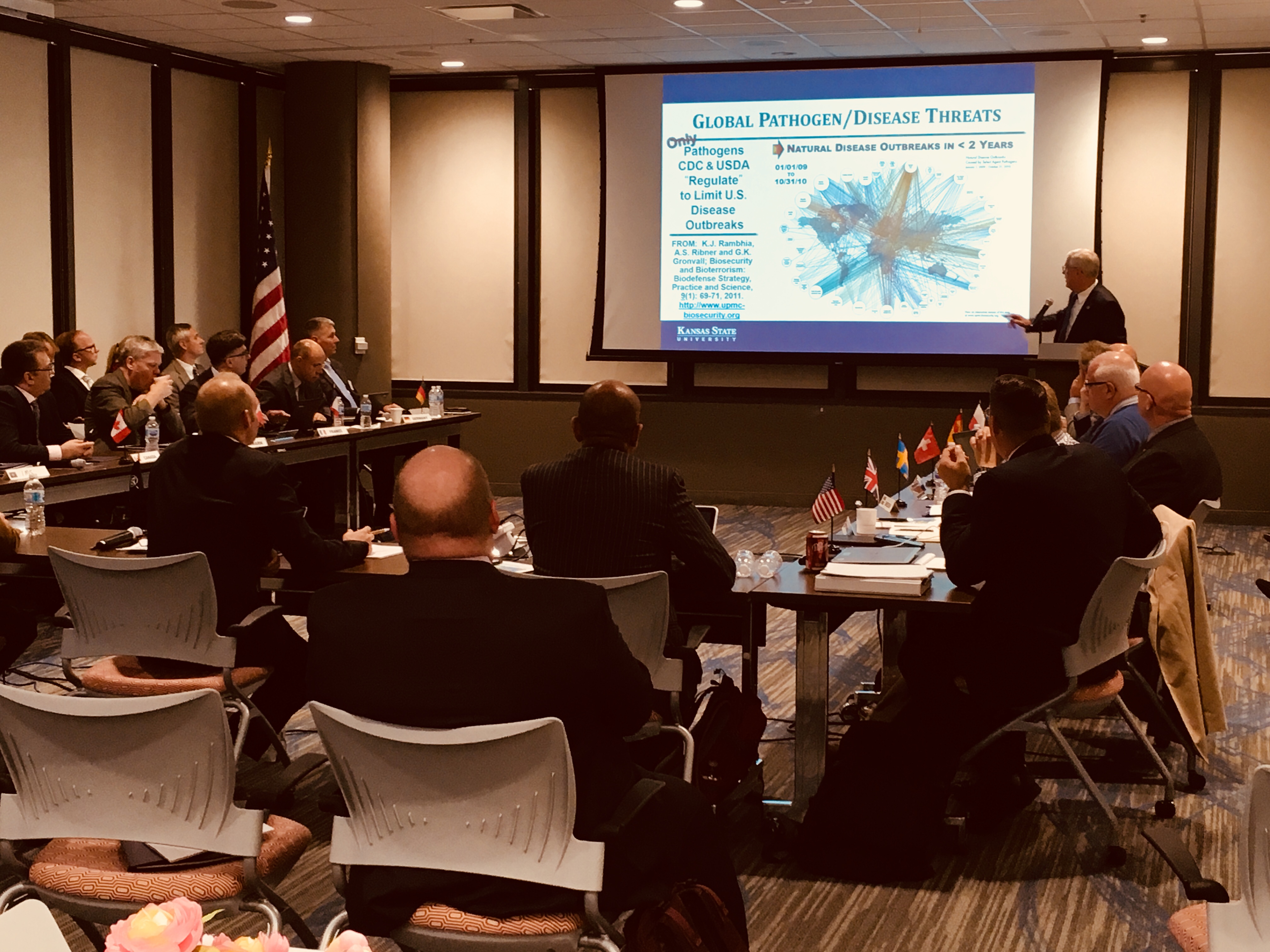 Myers welcomed the NATO Chemical, Biological, Radiological and Nuclear, or CBRN, Medical Working Group on Oct. 3 to its weeklong meeting in Kansas City, Missouri. It was the 41st biannual meeting of the group and its first meeting in the U.S.

More than 50 attendees from 16 nations were at the meeting, which focused on medical requirements to confront CBRN hazards. Myers' presentation concentrated on biological threats to agriculture and stressed the importance of improving agrosecurity and agrodefense.

"Agricultural threats tend to be overlooked even though food and feeding the world is critically important," Myers said. "Kansas State University has a long history in bio/agrodefense."

Myers discussed the university's excellence in the research area, including its leadership as the Silicon Valley for biodefense. The university has been involved in the national biodefense discussion since it published the "Homeland Defense Food Safety, Security and Emergency Preparedness Program" — also known as "The Big Purple Book" — in 1999. It has continued as a bio/agrodefense leader through the Biosecurity Research Institute, which is a biosafety level-3 facility that is jump-starting research planned for the National Bio and Agro-defense Facility.

Myers gave important insight into the reality of bio/agroterrorism, and provided anecdotes from his role as the chairman of the Joint Chiefs of Staff during the aftermath of the Sept. 11 attacks. Myers described how U.S. troops went into an Afghanistan cave in 2002 and found an al-Qaida list of planned bioweapons pathogens, including human, livestock, poultry and plant pathogens.

He noted how recent disease outbreaks — such as the porcine epidemic diarrhea virus, known as PEDv, outbreak in the U.S. and the wheat blast outbreak in Bangladesh — illustrate the need to improve biosecurity and agrosecurity through research.

"Consensus is building in the popular press and scientific journals that biothreats are real, including both natural disease and biological weapons threats," Myers said. "The world must be prepared, but we aren't."

Kansas State University is helping the world prepare as the site for the $1.25 billion National Bio and Agro-defense Facility, which will include more than 580,000 square feet of laboratory space to study emerging zoonotic and animal diseases. It will be fully operational in 2022-2023 and will replace the Plum Island Animal Disease Center.

"It is vital to protect against all threats, including chemical, biological, radiological and nuclear," Myers said. "This work is critically important to protecting the free world."