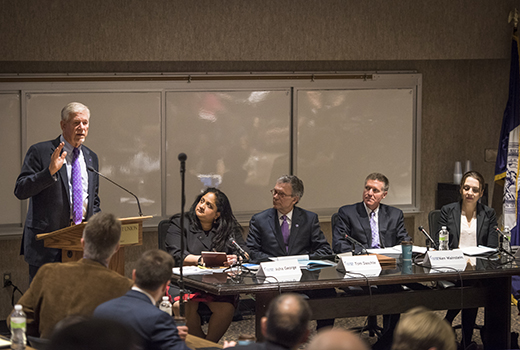 MANHATTAN — Kansas State University is strengthening its reputation as the Silicon Valley for biodefense.

The university is featured in several sections of the Blue Ribbon Study Panel on Biodefense's special bipartisan report released on Wednesday, Oct. 18. The report, titled "Defense of Animal Agriculture," is based on a January 2017 series of agrodefense discussions conducted at Kansas State University.

"There's no question that Kansas State University is a national leader in animal health, agriculture and food safety research," said Kansas State University President Richard Myers. "Our expertise, facilities and research programs show how we are contributing the national discussion surrounding agrodefense and biodefense. We appreciate the recognition of our efforts from the Blue Ribbon Study Panel on Biodefense."

The Blue Ribbon Study Panel on Biodefense — chaired by former Sen. Joe Lieberman and former Secretary of Homeland Security Tom Ridge — recommends changes to U.S. national policy and law to strengthen biodefense. The panel will share the report with the Trump administration, Congress and the public.

The report highlights threats to agriculture through emerging zoonotic diseases and describes the importance of agrodefense as a matter of national security. It delves into U.S. agrodefense today — including challenges and solutions — and analyzes real-world events, such as the 2014-2015 outbreak of a highly pathogenic strain of avian influenza.

"The Panel views protection of agriculture — the cultivation and breeding of animals and plants for food, fiber, and other products used to sustain human life — as a critical part of the overall biodefense mission space," the report states in its executive summary. The report also points out that "three-quarters of emerging infectious diseases are, in fact, zoonotic in nature," which means they have the potential to be transmitted to people. The protection of human health is directly tied to animal health, which is too often overlooked.

During the January 2017 discussions, Daschle praised Kansas State University for its leadership and collaboration to address national challenges.

"K-State has really become the Silicon Valley for biodefense," Daschle said at the discussions. "Its Biosecurity Research Institute, links to the Kansas Intelligence Fusion Center and the National Bio and Agro-defense Facility are all illustrative of the extraordinary effort that is now underway in Manhattan. It's an amazing demonstration of innovation, of collaboration and of engagement."

During the panel, Kansas State University researchers discussed their work on emerging diseases — Zika virus, West Nile virus, avian influenza and porcine epidemic diarrhea virus, known as PEDv — as well as efforts to fight biological terrorism, such as the anthrax events of 2001, which affected Daschle. They also discussed pursuing biodefense through partnerships with government, industry and other universities. Those discussions formed the foundation for the panel’s report on defending animal agriculture.

Read the bipartisan report from the Blue Ribbon Study Panel on Biodefense.