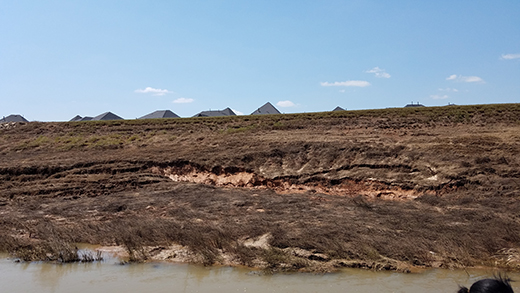 Slope failure documented by a Geo-Engineering Extreme Events Reconnaissance team as a result of Hurricane Harvey. Stacey Kulesza, an assistant professor of civil engineering at Kansas State University, was a member of the team. | Download this photo.

As a member of an NSF Geo-Engineering Extreme Events Reconnaissance, or GEER, team, Stacey Kulesza, assistant professor of civil engineering, was in the Houston area Sept. 8-11 to examine scour — or erosion — around foundations, dams and levees.

The GEER team included university professors such as Kulesza and prominent engineers. A volunteer for GEER since 2013, this was Kulesza's first mission.

"My research area is in geotechnical site characterization, including soil erosion, to support the design of novel and resilient infrastructure," Kulesza said. "Since GEER missions are directly related to my research, I volunteered because developing sustainable and resilient infrastructure is one of my primary interests. I also volunteered because I am originally from Texas and it was hard to watch what was happening there. Like so many Americans, I wanted to help."

The Geotechnical Extreme Events Reconnaissance Association was formed as an outgrowth of grassroots efforts to investigate and document the geotechnical impacts of the 1989 Loma Prieta earthquake, 1994 Northridge earthquake and 1995 Kobe earthquake. The NSF awarded a grant to GEER to help formalize post-disaster geotechnical engineering reconnaissance efforts.

While in the Houston area, Kulesza and her fellow GEER team members visited Addicks and Barker dams with the U.S. Army Corps of Engineers, which briefed them on the history of the dams, their construction, as well as how they performed and how the Corps monitored them during the hurricane.

"We drove along the crown, or top, of both dams from end to end and documented their conditions," Kulesza said. "We also looked at the current construction that was going on before the hurricane and documented the water levels in the reservoir."

The team examined the Buffalo Bayou, which channels the waters from the dams through Houston, documenting how high the water was in the bayou at that time, evidence of how high it reached and any erosion damage. The team also toured a levee district in nearby Sugarland, Texas.

Other stops around the Houston area included a road in Rosenburg that failed at a creek crossing and a retaining wall in Houston that failed, leading to development of a sinkhole and a fallen road. The team also toured the San Jacinto River downstream from the Conroe Dam, where water levels were back to normal. The team was able to document the bridge scour, collect samples and note damage to bridges along the river.

The information gathered will be used to write a report that will be shared with the geotechnical community and the public to shows what the team learned. Once completed, it will be available at geerassociation.org/reconnaissance-reports/table-view.

Kulesza said the mission shows just how important soil is to everyday life.

"We often don’t think about how soil literally supports society, whether it is controlling the flow of water from extreme events, supporting our infrastructure, or as a medium that grows plants for food and energy," she said. "Soil is a constant medium and we need to consider how humans are altering this natural material."

Kulesza hopes to advance her research through her GEER experience. She will seek additional funding for her research group and anticipates examining new research areas and fostering new collaborations through the connections she formed with other geotechnical engineers involved with the mission.

"I discussed what I did, why I did it and what we learned with both of my classes before and after the trip," she said. "I documented our site visits on Twitter, @DrKuleszaS, and encouraged my students to follow me, to see what I was seeing. I will likely give several formal presentations to our undergraduate and graduate students to broadly disseminate our findings."