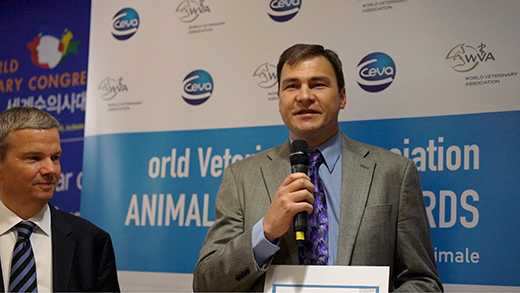 MANHATTAN — A Kansas State University veterinarian has earned a new global recognition for his commitment to animal welfare.

Hans Coetzee, professor and head of the anatomy and physiology department in the College of Veterinary Medicine, is one of six recipients of the World Veterinary Association's Global Animal Welfare Awards. Co-founded and supported by Ceva Santé Animale, a global veterinary health company, the awards were presented to an outstanding veterinarian in each of the six regions of the World Veterinary Association for providing outstanding and exemplary welfare-related services to animal owners, hostels, fellow veterinarians and the public.

Coetzee was recognized for his work with livestock animal welfare, particularly for his research on ways of advancing methods to alleviate pain in livestock. Coetzee is internationally recognized for his work in developing objective assessments of pain experienced by livestock animals during routine management procedures. He has secured more than $9 million in research funding from federal, nonprofit and industry sources, and his expertise is sought by academic researchers and pharmaceutical companies worldwide. He holds one U.S. patent for alleviating pain and improving performance during dehorning and castration, with two additional patents are pending. Coetzee also is co-founder of the biannual International Symposium on Beef Cattle Welfare.

The awards were presented at a ceremony Aug. 29 at the World Veterinary Association's 33rd World Veterinary Congress in South Korea. The ceremony included a short video on Coetzee, as well as videos on the other award recipients.

It is the second time this summer Coetzee has been honored for his work with animal welfare. He was presented the 2017 Animal Welfare Award by the American Veterinary Medical Association at its national convention in July. This honor also recognized his commitment to the welfare of livestock and his achievements in development of pain assessment models and pain management of livestock.

The author or co-author of 115 peer-reviewed scientific manuscripts, Coetzee also has edited two books and is author or co-author of eight book chapters. He has served on a variety of animal welfare committees and boards, and has been the recipient of many industry awards, including the 2014 American Association of Bovine Practitioners' Award of Excellence and the 2014 Zoetis Award for Veterinary Research Excellence.

The College of Veterinary Medicine's Hans Coetzee has received the World Veterinary Association's Global Animal Welfare Award for his work with livestock animal welfare, particularly for his research on ways of advancing methods to alleviate pain in livestock.