MANHATTAN — From coast to coast and across the heartland, the Aug. 21 total solar eclipse will be an awe-inspiring and rare event, says a Kansas State University physicist.

"This is our special Great American Eclipse and it's going to be a really remarkable event," said Chris Sorensen, Cortelyou-Rust university distinguished professor of physics. "If you have the ability to travel to the path of totality, I highly recommend that you go."

On Monday, Aug. 21, the moon will completely cover the sun in a total eclipse of the sun. A wide stretch of the United States — including northeast Kansas — is within the path of totality, which is a 70-mile wide path that goes from Oregon to South Carolina. It is the first total eclipse of the sun visible in the U.S. since 1979 and is the first total solar eclipse visible in Kansas in 99 years.

What will happen
Around 11:40 a.m. in Kansas, the moon will make first contact with the sun and start the stages of partiality. A few moments before totality — which will be few minutes after 1 p.m. — people will be able to see Baily's beads, which are a series of bright spots of light from the sunlight passing close to the surface of the moon, skimming through lunar mountain valleys. Shortly after that, the diamond ring effect will occur with a single brilliant bead. Only when that last diamondlike bead disappears does totality start — and only then can people view the eclipse with the naked eye. Totality will last about two and a half minutes for people in the center of the path. The end of totality is marked by the reappearance of a diamondlike bead followed quickly by Baily's beads, which also marks the time that people should put solar glasses back on or use eye protection again. The moon makes its last contact with the sun around 2:30 p.m.

During a total solar eclipse, the environment changes, too, Sorensen said. Winds die down and temperatures get cooler. Birds start roosting and singing evening songs, crickets start chirping and nocturnal animals move as they would at night. An eerie darkness will descend.

"You want to make sure you watch the partial eclipse with your solar glasses on so that you can safety watch what is happening to the sun," Sorensen said. "Once the eclipse is total, take the glasses off. During totality, certainly look at the sun, which will be surrounded by its shimmering corona, but don't forget to take a look all around you to get a sense of what is happening to your environment, too. Remember, you're now in a 70-mile diameter dark shadow of the moon and that means all around you is sunlight. You may be able to see sunlight 30 or 40 miles in the distance, very likely with tinges of sunrise and sunset colors."

How to view the eclipse
It is never safe to look directly at the sun, Sorensen said, and all eclipse watchers should practice eye safety. Solar eclipse glasses and other protective measures should be used at all times for watchers outside the path of totality and during any partial phase. For watchers inside the path of totality, solar eclipse glasses and safety measures still should be used, but may be removed briefly during the moments of the total eclipse.

• Solar glasses and viewers
Make sure eclipse glasses or hand-held solar viewers are properly qualified for protecting eyes, Sorensen said. They should come from a reputable vendor and should include the certification that it meets the requirement for ISO 12312-2.

Only people in the path of totality can remove eye protection during the brief period of totality. The key is to watch for Baily's beads and the diamond ring: People can remove solar glasses and viewers when Baily's beads and the final diamond disappear before the total eclipse, but they must put eye protection back on when the beads reappear, marking the end of the total eclipse.

Sunglasses, photographic negatives, smoked glass and other dark objects are not safe ways to view the eclipse, Sorensen said.

If people don't have a filter, they still can use the telescope during the eclipse phases by adjusting the telescope focus and using a method called eye projection. With this method, people can use the eyepiece to project the sun's image on a piece of paper or other surface.

• Pinhole cameras
Pinhole cameras are a simple and effective way to view the eclipse, no matter if viewers are inside or outside the path of totality. To make a pinhole camera, take a pen and poke a hole in a piece of paper or cardboard and hold it in the sun during the eclipse. The sun will shine through the hole and project the eclipse stages as crescents on the ground a few feet away.

Sorensen also recommends looking underneath a tree during the eclipse because the overlapping leaves also act as pinhole cameras and the eclipse stages will be projected on the ground as a myriad of crescents.

K-State eclipse events
Several Kansas State University organizations — including the physics department, K-State Global Campus, the K-State Alumni Association, the Office of Student Life and the Division of Communications and Marketing — have partnered with the Flint Hills Discovery Center for a series of outreach events to celebrate the 2017 solar eclipse.

All of the following events are open to the public:

• Total Solar Eclipse Bus Trip, 8 a.m. to 5 p.m. Monday, Aug. 21. Kansas State University and the Flint Hills Discovery Center are partnering with Highland Community College for a day of education and eclipse viewing. The buses will leave at 8 a.m. and participants will travel to Highland Community College to view the eclipse. For more information and to purchase tickets, visit k-state.edu/eclipse/bus-trip.

Kansas State University physicist Chris Sorensen offers tips to safely watch the Aug. 21 total solar eclipse, both inside and outside the path of totality. | Download this photo. 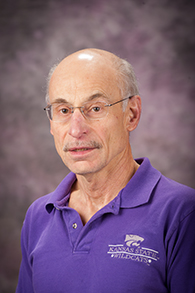 Chris Sorensen, Kansas State University Cortelyou-Rust university distinguished professor of physics and an amateur astronomer, has studied the sky for years and offers tips to safely watch the Aug. 21 total solar eclipse, both inside and outside the path of totality. 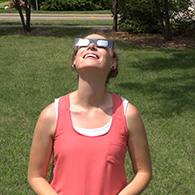 Kansas State University physicist Chris Sorensen offers tips to safely watch the Aug. 21 total solar eclipse, both inside and outside the path of totality.

"This is our special Great American Eclipse and it's going to be a really remarkable event. If you have the ability to travel to the path of totality, I highly recommend that you go."
— Chris Sorensen, Cortelyou-Rust university distinguished professor of physics