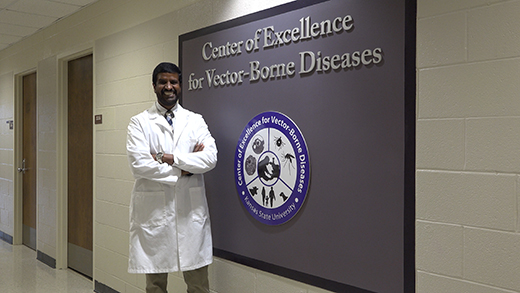 Roman Ganta, director of the Center of Excellence for Vector-Borne Diseases at Kansas State University, says lone star ticks bites should be of most concern to people who have been repeatedly exposed to the pest. | Download this photo.

MANHATTAN — Reports this summer have alerted the public to a little-known health threat that could occur from the bite of a lone star tick: the development of an allergy to red meat.

A Kansas State University researcher says this health threat is more of a concern to people who have been repeatedly exposed to this tick.

"If someone has been bitten by a lone star tick for the first time, they shouldn't feel they will develop a red meat allergy," said Roman Ganta, director of the university's Center of Excellence for Vector-Borne Diseases in the College of Veterinary Medicine. The center researches human and animal diseases caused by ticks, mosquitoes and other vectors.

Lone star ticks feed on a nonhuman host, such as white-tailed deer, that has a particular type of carbohydrate, alpha-gal, which is not present in humans. Over time, the buildup of alpha-gal in the human bloodstream will produce an immune — or allergic — response when a person consumes meat, such as a steak, hotdog or hamburger, Ganta said.

Cases of the allergy could become more frequent because the lone star tick may be more prevalent than it was 10 or 15 years ago, Ganta said.

"Its expansion is linked to the spread of white-tailed deer, which is the major host of this particular tick," Ganta said.

Human activity is a factor in the spread of the deer.

"Any time there's a rapid expansion, such as new construction, we're not restricting our own boundaries," Ganta said. "We keep chopping all the wooded places, so deer are adapting to the population in the city. It's very common in Manhattan, Kansas, to see white-tailed deer. Ticks from the deer will drop into the lawn, backyard or front yard, or even parks."

Other animals also can be hosts for the lone star tick.

"You'd be surprised to know we see them a lot on wild turkeys," Ganta said. "The wild turkey is also present in large numbers."

Tips on avoiding tick bites are available from the Centers for Disease Control and Prevention.