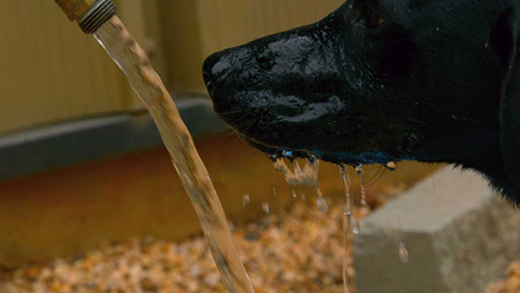 Keeping your pets hydrated when summer temperatures climb will reduce the risk of heat exhaustion and heat stroke, according to Kansas State University veterinarian Susan Nelson. The body temperature of a dog should be between 100 and 102.5 degrees; above 103 degrees is considered abnormal. | Download this photo.

MANHATTAN — Given the high temperatures much of the country has been experiencing lately, it's important to remember that our furry canine friends have an extra layer on and are susceptible to the heat, according to a Kansas State University veterinarian.

When the summer heat index rises, the risk for dehydrated and overheated dogs does the same, said Susan Nelson, clinical professor at the university's Veterinary Health Center. Nelson said it's important to recognize the signs of heat stroke in your pet and know what you can do to prevent it from becoming a problem.

According to the Centers for Disease Control and Prevention, when temperatures outside range from 80 to 100 degrees, the temperature inside a car parked in direct sunlight can quickly climb to between 130 to 172 degrees. That means it's best to leave pets at home when running errands, Nelson said.

"Even with the windows cracked, we should never leave our pets in a vehicle unattended," Nelson said. "For what might seem like a short trip into the bank, it can end up being fatal for our pets."

To prevent heat stroke in your pets, Nelson said to keep in mind the time of day you take them outside for walks or runs. She recommends taking them out in the cooler morning or later evening hours.

"Even if they have never had a problem with heat before, watch for signs of lagging behind, thick saliva and dark mucus membranes. These are all indications your dog might be starting to get heat stress," Nelson said.

The following are some of the symptoms Nelson said to watch for when trying to detect heat stroke in your dog:

• Body temperature above 103 degrees.
• Excessive or vigorous panting.
• Dark red, blue or purple gums.
• Thick saliva and excessive drooling.
• Dizziness or disorientation.
• Restlessness or appearing distressed.
• Rapid heart rate or irregular heartbeat.
• Vomiting or urinating blood, or traces of blood in bowel  movements.
• Seizures and muscle tremors.
• Lying down and unwilling or unable to get up.
• Collapse or loss of consciousness where the animal cannot be awakened.

If you think your dog is starting to become overheated, move it to a shaded area and offer cool water to drink until the dog has cooled down, Nelson said. If your dog is showing signs of more advanced heat stress, wet it down with cool water — not ice water — and place the dog in front of a fan. If its condition does not change, run the air conditioning in your car and get the dog to a veterinarian for further treatment immediately, as every second counts, she said.

Dehydration also can be a problem with pets on hot summer days. Nelson said signs of severe dehydration, especially in dogs, include the appearance of sunken eyes, gums feeling dry and tacky, and overall weakness in the animal. Dogs pant to cool down, and they tend to pant frequently when overheated and tired, she said.

"When the air goes by, they dissipate the heat by breathing this way, but this also means it is easier for them to dehydrate more quickly when they're panting a lot," Nelson said.

Nelson also recommends that outdoor dogs and cats have access to plenty of fresh, clean water. Water bowls should be checked and filled as needed several times per day during hot weather. Food should be changed a minimum of twice daily, as it spoils quickly in warm weather and flies are attracted to food that is left out, she said.

If you notice your pet having medical problems contact a veterinarian immediately. You can also reach out to the Kansas State University Veterinary Health Center at 785-532-5690. 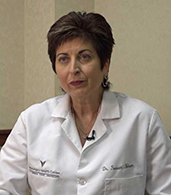