MANHATTAN — The world's lightest 3-D printed structure is so lightweight that it can be placed on top of a cotton ball or the petals of a flower.

"Graphene is a revolutionary material and it makes sense that its aerogel form would be just as important," Lin said. "Our 3-D printed graphene aerogel has important properties that give the material many applications for better electronics, batteries or semiconductors."

Not only is the 3-D printed material groundbreaking, but the way the researchers print the three-dimensional graphene is just as revolutionary.

Graphene is a single atom-thick sheet of hexagonally coordinated carbon atoms, which makes it the world's thinnest material and gives it valuable physical and electronic properties.

To 3-D print graphene aerogel, the researchers use a modified inkjet printer that uses two nozzles. They 3-D print droplets of a graphene oxide and water mixture in a freezer on a cold plate that is minus 20 degrees Celsius. This method creates a 3-D ice structure of graphene and frozen water, which helps the graphene to maintain its shape, Lin said.

When printing is complete, the researchers place the 3-D material in a freeze dryer, which removes the ice by providing high vacuum and low temperature. What's left is a three-dimensional graphene aerogel that maintains its shape at room temperature.

"We didn't plan on setting a record, but it's certainly a nice recognition of our work," Zhou said. "I think this helps show the enormous potential that graphene aerogel has in our daily lives."

It has been notoriously difficult to create three-dimensional graphene shapes, Lin said, and his collaborative team is the third group in the world to 3-D print graphene. Their new printing method is an improvement because it uses fewer ingredients and only requires graphene oxide and frozen water. Additionally, the two nozzles on the modified printer enable the researchers to create complex shapes with less material, which makes it the lightest material in the world.

The graphene aerogel has numerous possibilities, from flexible batteries to better semiconductors, and it could even be used to make better insulation in the construction of buildings.

"Aerogel is a special material with a lot of applications and that's why it is one of the hottest materials throughout the world," Lin said.

A square sample of 3-D printed graphene aerogel is so lightweight that a wheat plant's individual awn can hold it without bending. The material — developed by engineers from Kansas State University, the University at Buffalo and Lanzhou University in China — has been declared the lightest 3-D printed material in the world by GUINNESS WORLD RECORDS. 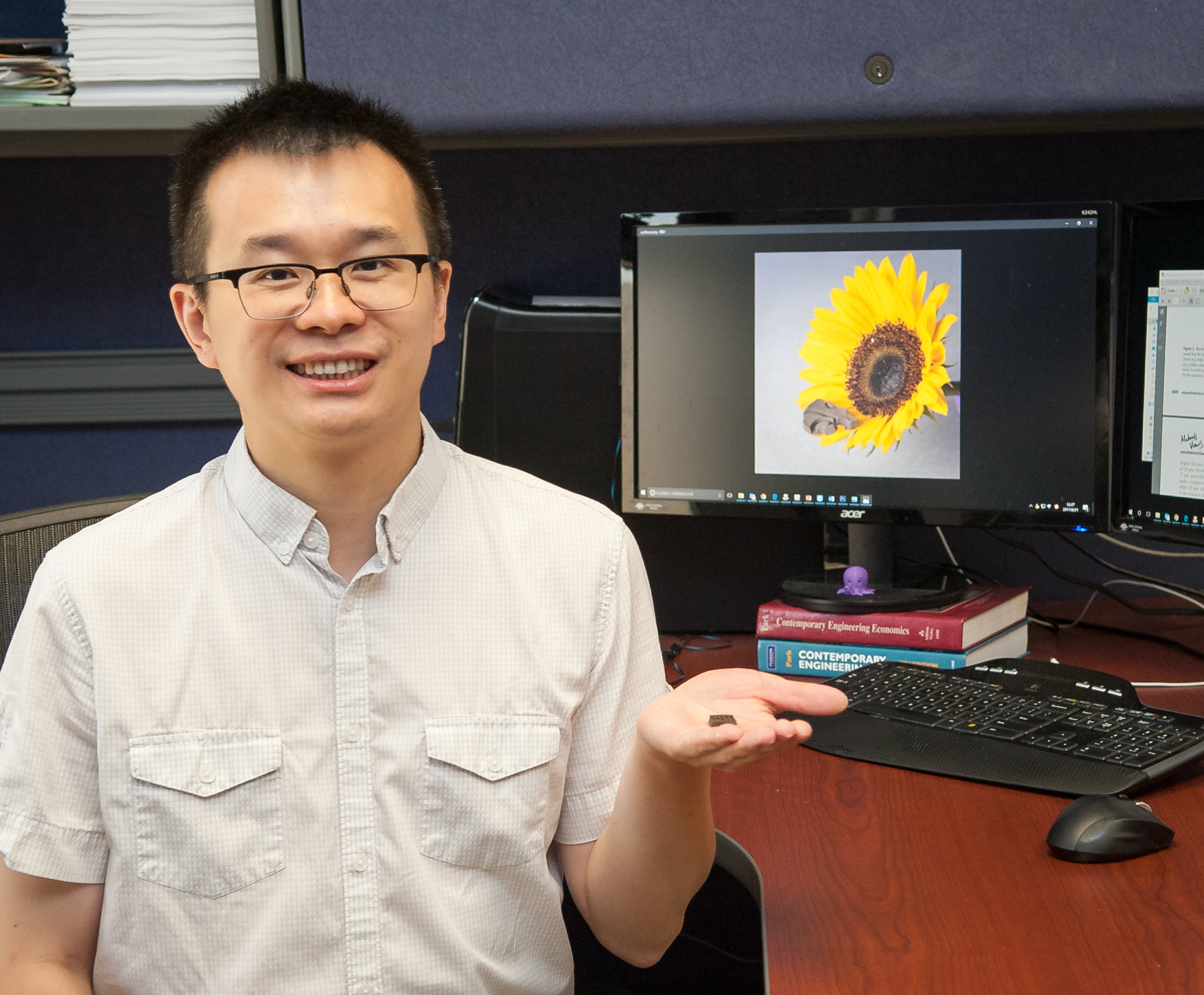 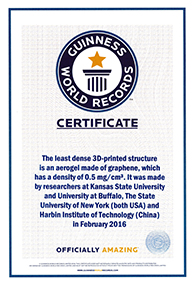 "Our 3-D printed graphene aerogel has important properties that give the material many applications for better electronics, batteries or semiconductors."