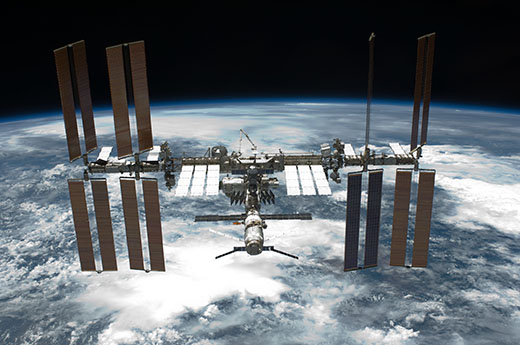 Astronauts aboard the International Space Station experience decreased physical fitness because of a decrease in the way oxygen moves through the body, according to a Kansas State University kinesiology study. Photo courtesy of NASA. | Download this photo.

MANHATTAN — Astronauts aboard the International Space Station have decreased physical fitness because of a decrease in the way oxygen moves through the body, according to a Kansas State University kinesiology study.

Carl Ade, assistant professor of exercise physiology, and collaborators partnered with the Johnson Space Center to find that astronauts' exercise capacity decreases between 30 and 50 percent in long-duration spaceflight because the heart and small blood vessels are not as effective at transporting oxygen to the working muscle.

"It is a dramatic decrease," Ade said. "When your cardiovascular function decreases, your aerobic exercise capacity goes down. You can't perform physically challenging activities anymore. While earlier studies suggest that this happens because of changes in heart function, our data suggests that there are some things happening at the level of the heart, but also at the level of the microcirculation within capillaries."

The NASA-funded research appears in the Journal of Applied Physiology in the publication "Decreases in maximal oxygen uptake following long-duration spaceflight: Role of convective and diffusive O2 transport mechanisms." The journal also featured the research in a recent podcast.

Other Kansas State University researchers involved include Thomas Barstow, professor of kinesiology, and Ryan Broxterman, 2015 doctoral graduate in physiology and postdoctoral fellow at the University of Utah. Alan Moore, associate professor of health and kinesiology at Lamar University, also contributed.

While in outer space or on the International Space Station, astronauts have to perform many physically demanding tasks, from the simpler task of opening a capsule door to potentially more intense future planetary tasks such as helping a fallen crew member. Just as important is making sure astronauts can perform life-saving tasks when they return to gravity — tasks that could include an emergency landing on Earth or performing extravehicular activities on the surface of Mars, Ade said.

For the study, the researchers used Johnson Space Center data on nine male and female astronauts who spent about six months aboard the International Space Station. The data included exercise measurements before and after their time in outer space.

The astronauts performed a stationary bike exercise test several months before they launched to the International Space Station. The researchers established the astronauts' exercise capacity through measurements — such as oxygen uptake, cardiac output, hemoglobin concentration and arterial saturation — that illustrate how effectively the body transports oxygen to the muscle mitochondria. Within a couple of days of returning to earth, the astronauts performed the same stationary bike exercise test to determine changes in aerobic exercise capacity.

By comparing the two sets of data, the researchers saw a 30 to 50 percent decrease in maximal oxygen uptake. Maximal oxygen uptake is the maximum rate of oxygen that is consumed during exercise and shows the cardiorespiratory health of a person. The researchers attribute this decrease to the way that microgravity changes the interaction between blood vessel capillaries and red blood cells, but say that more research is needed to understand what is happening in the capillaries.

"This decrease is related to not only health, but performance," Ade said. "If we can understand why maximal oxygen uptake is going down, that allows us to come up with targeted interventions, whether that be exercise or pharmacological interventions. This important new information can help these astronauts and prevent any adverse performance changes in their job."

While the research is key to planning for future long-duration spaceflights, such as journeys to Mars or deep space, it also can help understand blood vessel function in older patients or patients with heart failure.

"We have seen similar situations happen with heart failure and with aging," Ade said. "If we can better understand what is happening in the astronaut and how to prevent it, then we might be able to do the exact same thing in a patient who is older or who has heart failure."

Listen to the Journal of Applied Physiology podcast. 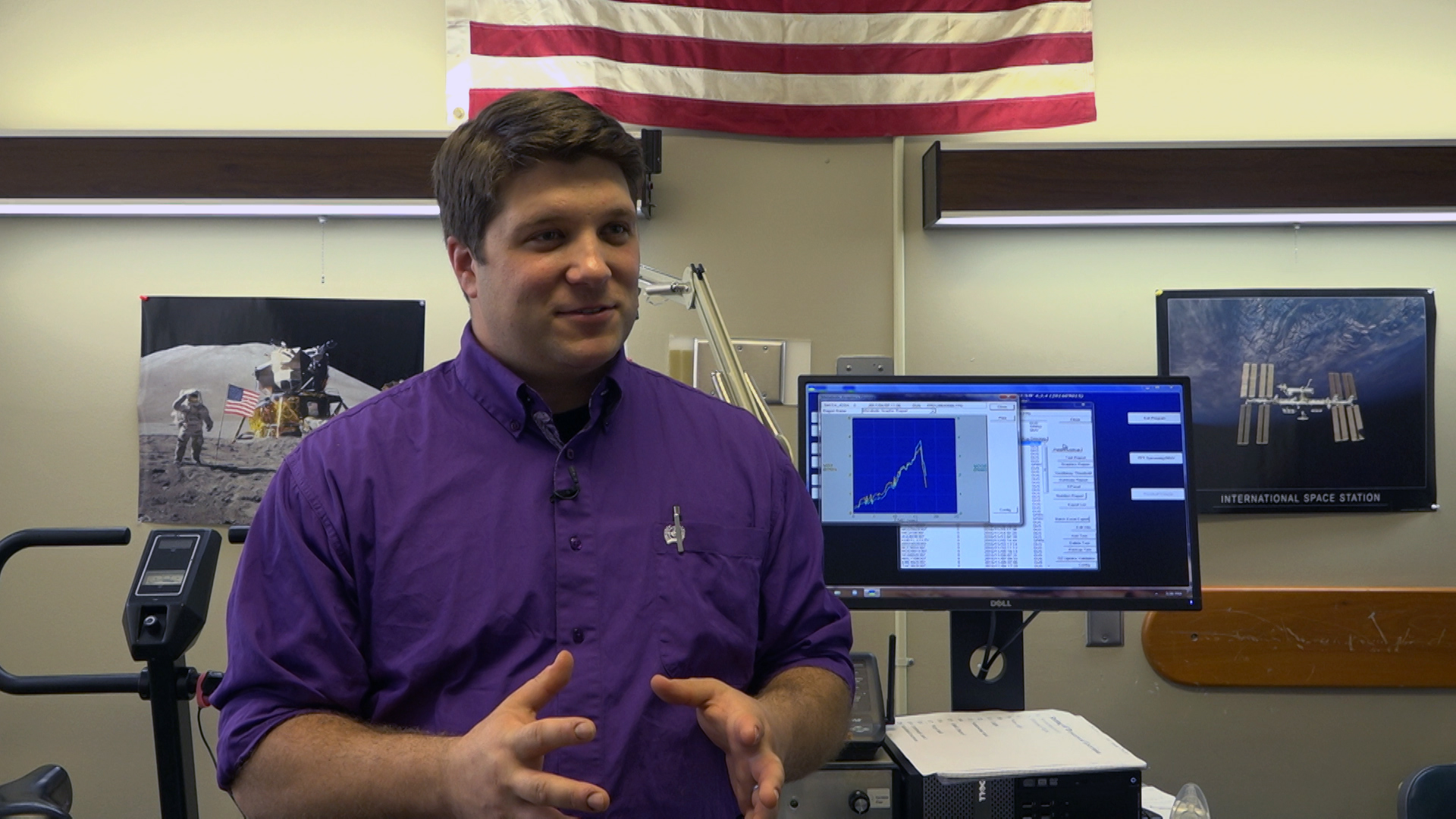 Carl Ade, assistant professor of exercise physiology, and collaborators have found that astronauts' exercise capacity decreases in long-duration spaceflight because the heart and small blood vessels are not as effective at transporting oxygen.

A Kansas State University kinesiology study has found that astronauts aboard the International Space Station have decreased physical fitness because of a decrease in the way oxygen moves through the body.

"This important new information can help these astronauts and prevent any adverse performance changes in their job."