MANHATTAN — Military spouses may not wear uniforms or enter combat, but they deserve appreciation for their sacrifices, according to a Kansas State University expert on military families.

Briana Nelson Goff, professor of family studies and human services and director of the Institute for the Health and Security of Military Families in the College of Human Ecology, said most military spouses experience a lifestyle of constant adjustment.

"It's important to realize that the military service member may be deployed, but everyone in the family is serving," Goff said. "The spouse and kids may not be deployed, but they are serving their country as well, so we need to honor that."

After finding out their partner is deploying, Goff said military spouses can go through several phases:

• The preparation phase, when they learn more about where their spouse is going and for how long.

• The deployment, which may include months of single parenting.

• Their spouse's return, which may not include much notice.

• Leave after deployment, which may include family vacations or just time together at home.

• Their spouse returning to his or her regular work schedule, when the family attempts to return to normal or find a "new normal," Goff said.

For some spouses, the start of a deployment is the most stressful portion of the cycle, especially when they have short notice about it. Others find the preparation phase more intense than the deployment itself.

"Each family is a little different, but it's not easy for anyone," Goff said.

Along with time-related adjustments in the phases of military life, spouses experience geographical adjustments, with many military families moving every two to three years.

"They may come to one place that has a really good network with a supportive community, and then move to another place that doesn't have those features," Goff said. "It's understandable to expect the next place to be the same, and when it isn't, the transition can be difficult."

In addition to the rollercoaster of emotions many spouses face through their various adjustments, some spouses must adapt to their partner coming home with post-traumatic stress disorder, which affects the entire family. Many people assume if a military member has PTSD, the disorder will show up immediately upon return, but Goff said PTSD can sometimes be triggered by other changes, such as a transition out of the military or a cross-country move.

"It's hard to predict who will experience PTSD, why they might get it and when it might hit," Goff said. "Regardless, it's often difficult for spouses to understand."

Goff said about 15-20 percent of military spouses are diagnosed with general anxiety disorder or major depression. People can help military spouses relieve stress and find joy in many ways, such as offering to babysit while their partner is deployed; inviting them over for dinner or taking dinner to their family; becoming their workout buddy; and sitting down for coffee to listen to their stories.

"The more we can help bring a sense of consistency and support to military spouses, the more they can provide stability and a sense of normalcy for the whole family," Goff said. "It's difficult because everyone is busy, but when we spend a bit of time to support a military spouse, we can help their family thrive."

Friday, May 12, is Military Appreciation Day in the U.S. The event is observed each year on the Friday before Mother's Day.

Institute for the Health and Security of Military Families 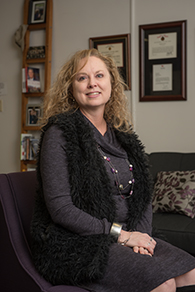 Briana Nelson Goff, professor of family studies and human services and director of the Institute for the Health and Security of Military Families at Kansas State University, says military spouses should be honored for their sacrifices. Goff has organized the annual Military Spouse Appreciation Day Luncheon at the university, which will be May 10 at the Marianna Kistler Beach Museum of Art.