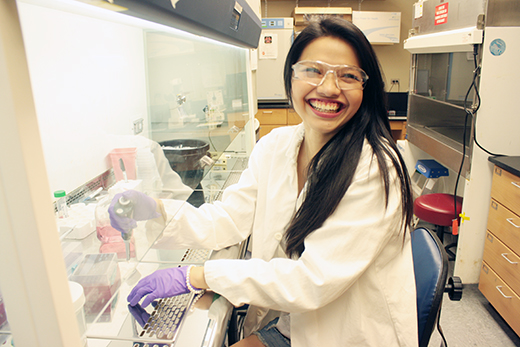 Kathlyn Gomendoza, a Kansas State University biology student, uses an undergraduate research fellowship from the American Society for Microbiology to study baculovirus in the laboratory of Lorena Passarelli, professor of biology. | Download this photo.

MANHATTAN — The American Society for Microbiology has awarded a Kansas State University student with an ASM Undergraduate Research Fellowship.

Kathlyn Gomendoza, senior in biology, Overland Park, will use the fellowship to continue a research project she started working on her freshman year that focuses on baculovirus, which is virulent to insects but not to humans. It is used as a vector of vaccines against human papillomavirus and influenza virus and is under study as a potential vector for therapeutic cancer vaccines. Viral vectors deliver vaccines and other compounds through the body.

Gomendoza is a graduate of Trinity Academy, Wichita, and is the daughter of Richard and Christine Gomendoza, Overland Park.

The competitive national fellowship is awarded to students who are members of the American Society for Microbiology, or ASM, and plan to pursue graduate careers in microbiology. The fellowship includes a stipend of up to $4,000 for awardees to conduct full-time research during the summer at their universities, and it offers $1,000 in travel support for the students to present their results at the society's annual meeting, ASM Microbe.

"Learning about baculovirus stability and infectivity requirements will be essential for developing more efficient baculovirus-based preventive and therapeutic vaccines, which is an area of increasing research interest because of the virus's potential as a safe and effective vector," Gomendoza said. "Figuring out how to further stabilize baculovirus could help make a more stable vaccine."

Gomendoza will use the fellowship to expand on her previous research by working to develop a method for identifying proteins that have virus-generated disulfide bonds, which are bonds between amino acids that are brought together by enzymes.

Lorena Passarelli, professor of biology at Kansas State University, who is the principal investigator for the project, said it is uncommon for viruses to produce a protein that generates these types of bonds between proteins. However, in the presence of the enzyme that Gomendoza is studying, baculovirus sulfhydryl oxidase Ac92, viruses can form these bonds.

"Since the baculovirus gene that generates disulfide bonds is conserved in all baculoviruses, it indicates that it is an important enzyme for virus replication," Passarelli said. "Knowledge on the substrates of this enzyme will help in understanding virus assembly and infectivity processes."

Gomendoza is using affinity chromatography, which is a process of separating biochemical mixtures based on highly specific interactions, to study the interaction between the enzyme and its substrates.

"Kathlyn is an outstanding scholar and researcher, and she has learned significantly about developing and troubleshooting experimental designs," Passarelli said.

Gomendoza plans to pursue a Doctor of Medicine and another doctoral degree to treat patients and study viral vectors for gene therapy. Until then, she plans to continue researching baculovirus in Passarelli's lab.

"Being able to do procedures to learn something that nobody else has ever found out before is kind of an adventure," Gomendoza said. "Also, I sometimes get to use new techniques — tactics that didn't exist 20 or 30 years ago — which is new and exciting."

She was the Division of Biology's Most Promising Student Nominee in 2016 and was named the division's Most Promising Student in 2017. She is a member of the University Honors Program, Alpha Epsilon Delta pre-health honor society, Red Cross, the Division of Biology's academic advisor search committee and the American Society for Microbiology. She is a peer mentor in the Developing Scholars program, a mentor and ambassador in the university's Pre-Medical Club, and an ambassador for Kansas Louis Stokes Alliance for Minority Participation.

"Kathlyn is an outstanding scholar and researcher, and she has learned plenty about developing and troubleshooting experimental designs."