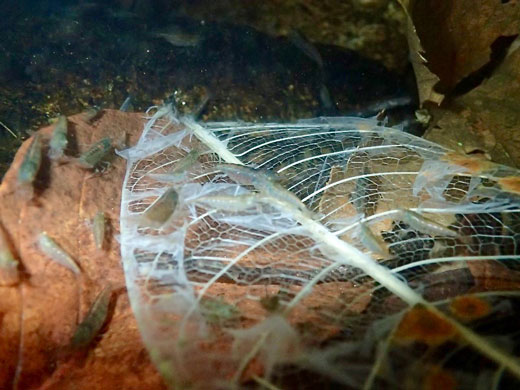 Kansas State University ecologists are part of an international team that found that the rate that microbes and invertebrates breakdown a leaf is not as sensitive to water temperature increases as once predicted. Walter Dodds took the photo of a decomposing leaf with shrimp in Valium Stream on Ilha Grande. | Download this photo.

MANHATTAN — The time it takes for a leaf to decompose might be the key to understanding how temperature affects ecosystems, according to Kansas State University ecologists.

Using leaf litter data in streams from 1,025 publications, a team of international stream ecologists, including Kansas State University's Walter Dodds, university distinguished professor, and Lydia Zeglin, assistant professor, both in the Division of Biology, found average leaf litter decomposition rates are less than half of what the metabolic theory of ecology would predict. The research, which measured how sensitive leaf litter is to increases in temperature, is published in Global Change Biology.

"The theory of how organisms respond to temperature says organisms will move at a faster rate at higher temperatures," Dodds said. "That relationship for single organisms — whether it's a lizard or bacterium — has a certain rate of increase with warmer temperatures. According to our study, the rate of decomposition will still happen faster with a rise in temperature, just not as fast as we expected."

The team evaluated data from publications that measured leaf litter in streams and rivers and determined that leaf litter breakdown rates may increase 5-21 percent if the average water temperature warms about 1-4 degrees Celsius. This finding is counter to the metabolic theory estimates of a 10-45 percent increase with the same increase in temperature.

Dodds said understanding the relationships among temperature, leaf decomposition and running water can help ecologists better predict how the carbon cycle will react with future climate adjustments. Since plant materials store a lot of the world's carbon, and streams and rivers help transport plant material around the world, leaf litter decomposition in streams can be a big contributor to atmospheric carbon. According to Zeglin, when leaves fall in running water, they can be transported to the ocean, and as they move through the water they will breakdown more completely. If leaves enter the soil and are preserved, carbon from those leaves is more likely to be sequestered and not as easily release into the atmosphere as carbon dioxide.

"Streams put a good amount of CO2 into the atmosphere, so the rate that those leaves breakdown is an indicator of how much carbon goes into the atmosphere," Dodds said. "The longer carbon is retained and stuck in leaves, as opposed to being respired as CO2 by either the microbes or the invertebrates that eat the leaves, the better."

By combining all the research data available and pulling out all the variables, the ecologists saw trends that indicated that organisms can adjust to changing environmental conditions and the breakdown rates may change slightly but shouldn't shock the system.

"To some degree, biological communities are going to adjust themselves to environmental change," Dodds said. "Either the organisms will adapt to the changing temperature or different organisms that are effective at warmer temperatures will take their place. If those organisms change the rate that plant material is broken down, more CO2 will return to the atmosphere more quickly."

The research team came up with the idea to extract data from thousands of already published studies and compare the breakdown rates of leaves from around the world at a National Science Foundation Long Term Ecological Research, or LTER, workshop. The data came from research papers on streams around the world, including LTER sites. The team found the papers using scholarly search engines such as Google Scholar or Web of Science.

"This meta-analysis shows that while there is variation from site to site in the relationship between temperature and decomposition, the compilation of information from the work of thousands of individual scientists allows us to better understand the global trends," Zeglin said.

Research, published in Global Change Biology with help from Kansas State University ecologists, found that leaf litter is not as sensitive to increases in temperature as ecologists once thought.

"That relationship for single organisms — whether it's a lizard or bacterium — has a certain rate of increase with warmer temperatures. According to our study, the rate of decomposition will still happen faster with a rise in temperature, just not as fast as we expected."