MANHATTAN — A Kansas State University researcher recently discovered that a commonly used spice is a champion at reducing carcinogenic compounds in grilled meats.

J. Scott Smith, professor of animal sciences and industry, found that black pepper nearly eliminates the formation of heterocyclic amines, or HCAs, which can form on the surface of meat when it is cooked. HCAs are recognized as carcinogens by the International Agency for Research on Cancer, which is the cancer agency of the World Health Organization, and the National Toxicology Program, which is part of the U.S. Department of Health and Human Services. Almost any meat, including beef, pork, chicken and most types of fish, can form the carcinogenic compounds.

In one study, Smith mixed 1 gram of finely ground black pepper with 100 grams of ground beef. The formulation worked very well at inhibiting HCAs, but the pepper flavor was too strong to be pleasant, Smith said. A more palatable and equally effective option is to blend pepper with other spices, like oregano and garlic.

"Blending pepper with antioxidant-rich spices works so well in ground beef patties and on steaks that the spice formulation eliminates nearly 100 percent of HCAs," Smith said. "In these cases, the spices are added at a level that is quite practical, so the result is flavorful and healthy."

In several years of research on carcinogens in meat, Smith has also found that marinades and herbs work very well at limiting HCAs without sacrificing flavor. A typical store-bought marinade reduces HCAs to nearly zero, Smith said. However, less is more when it comes to marinating time.

"Some people might think that if a little time in the marinade does some good for the meat, then a lot of marinating time would do a lot of good, but marinating too long has the opposite effect because it can cause the antioxidants in the sauce to decompose," Smith said. "Just a couple of hours is an ideal time for marinating."

Most of Smith's research focuses on adding antioxidant-rich spices that block the chemical formation of HCAs. When applied to the surface of meat — or mixed into the meat, as in the case of ground beef — some of the spices Smith has studied drastically reduce the incidence of HCAs. Most of the highly effective spices are from the mint family, which includes rosemary, thyme, oregano, basil, sage and marjoram, and the myrtle family, which includes cloves and allspice.

Smith said rosemary doesn't taste very good on steak, but the flavors play well with fish. To obtain the antioxidant benefits of rosemary without the herb's flavor, Smith recommends rosemary extracts, which can be applied to meat before cooking.

In addition to using spices and marinades, consumers also can protect themselves from HCAs by cooking their meats at low enough temperatures that the food does not burn or become blackened. HCAs are three to four times more prevalent on meats that are burnt compared to meats that are cooked without burning, Smith said.

"If you cook the meat at really low temperatures, it won't taste very good because the surface temperature forms flavor compounds during cooking," Smith said. "It's a trade-off. Consumers want to have enough temperature to get flavor compounds developed from chemical reactions, but at the same time, they ought to limit the temperature by not raising it to the point of burning." 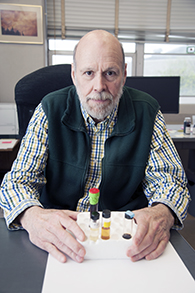 A Kansas State University researcher recently discovered that a commonly used spice is a champion at reducing carcinogenic compounds in grilled meats.