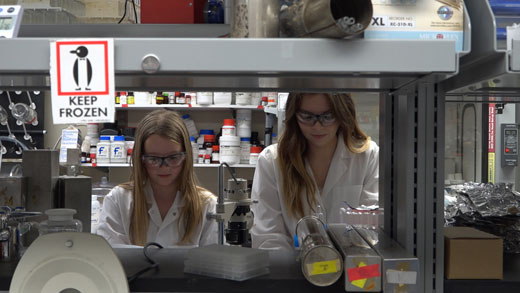 MANHATTAN — A little algae, a tenacious fifth-grader and a Kansas State University senior driven to mentor younger generations is one way to grow an award-winning state science fair project.

Sarah Gorn, May 2017 Kansas State University bachelor's degree candidate and biology undergraduate researcher, Overland Park, and Bradley Olson, assistant professor in the Division of Biology, mentored Rhodes as she designed her project, but Rhodes performed all the experiments and actual calculations herself.

Using Olson's lab and with Gorn's assistance, Rhodes grew Gonium, multicellular algae used in labs to model cellular evolution, in an algae growth media called SVM. According to Olson, Gonium's multicellularity — and the manipulation of that multicellularity — can help scientists understand the origin of cancer.

"My grandma and great-grandma had breast cancer, so I really wanted to work with cancer and find a cure for it," Rhodes said. "I was really excited when Dr. Olson told me that Gonium is related to the early stages of cancer, so that was really cool for me."

Rhodes manipulated the nutrients of the growth media to have an absence of potassium, phosphate, calcium or nitrogen to see which nutrient was most necessary for Gonium's multicellularity. Her results show that calcium and nitrogen, which was the control element, were the most essential for Gonium's growth as a multicellular organism because the lack of them causes the algae to grow like unicellular algae.

"My favorite part was mixing together all the chemicals for the SVM," Rhodes said. "If you put too much of one of the ingredients, then the Gonium might grow differently. You really want to grow it perfectly, especially if it is your control."

Using experiences as a biology major and undergraduate researcher, Gorn helped Rhodes understand the principles and safety protocols, and encouraged her to think critically about the process.

"I taught Ella about the basic science principles behind what we were doing, showed her safety protocols and guided her to manage the project, but that was basically it," Gorn said. "I think she's awesome. Look at what she's doing at 11 years old. She's definitely going to be a role model to somebody someday."

Mentoring young girls and encouraging them to find and pursue their passions is nothing new for Gorn. She also mentors girls with swimming and has found that those opportunities benefit her as well.

"Mentoring has always been something that I believe in because kids are the next generation and I want to do my part in making sure that they are growing up to be the best that they can be," Gorn said. "With any kid that I'm helping, whether in the pool or the lab, I'm learning how to communicate better and how to work as a team. Ella points out things that I make mistakes on all the time, so it's definitely a two-way street."

In her own research, Gorn is working with one of Gonium's genes to see if it can make unicellular algae multicellular. According to Gorn, by understanding how something can go from one cell to a multicellular organism, researchers may be able to apply that knowledge to understand how cancer, which starts as a single cell and divides uncontrollably, starts and how to control it.

"I think undergraduate research is invaluable to my education," Gorn said. "It definitely has helped me understand the material that I learned in the classroom that much better and it's something that I enjoy."

If conducting research in a working lab during Gorn's undergraduate years has been beneficial, then Rhodes' early start in research may help Rhodes achieve her dream job.

"I want to be a scientist but I don't know the type I want to be yet," Rhodes said. "I really like biology and I also really like physics. That's going to be a hard decision."

"Winning was really awesome because I didn't really think I was going to win as I was competing against an eighth-grader," Rhodes said. "I was kind of nervous, but I was really excited when I heard my name called."

Many of the research projects in Olson's lab are funded by the National Science Foundation, including Rhodes'.

"I taught Ella about the basic science principles behind what we were doing, showed her safety protocols and guided her to manage the project, but that was basically it. I think she's awesome. Look at what she's doing at 11 years old. She's definitely going to be a role model to somebody someday."