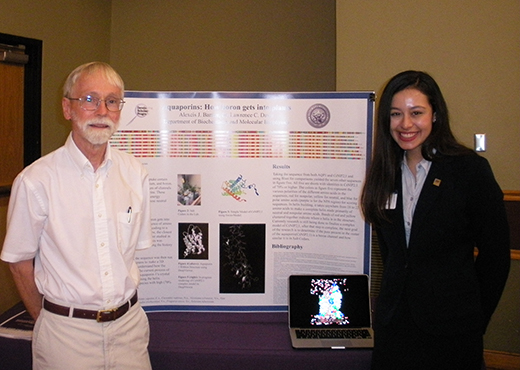 MANHATTAN — Salt cedar may have gotten a bad rap.

Also known as the flowering tamarisk tree, salt cedar originated in drier areas of Eurasia and has become a major weed in the southwestern United States, where it is considered an invasive species. But biochemistry researchers at Kansas State University may not only exonerate the plant, but also find that it can help remove pollutants from the environment.

Larry Davis, professor of biochemistry and molecular biophysics, and undergraduate researchers Alexcis Barnes, Salina, and Katie Rose McKinley, Shawnee, are working to understand why salt cedar is so prolific. The plant can tolerate high levels of two things that are toxic to other plants when present in more than trace amounts: salt and boron. Both can become concentrated from river irrigation, and boron is a common pollutant that finds its way into water from industry such as glass making, facilities burning wood or coal, and other sources. Boron pollution carries grim implications for agricultural areas.

"In the western part of the central valley of California, for example, it's a limiting factor," Davis said. "They're down to about five crops they can grow because the boron contamination makes black spots on lettuce and other plants. They can still grow sunflowers and canola because they are harvesting the oil and don't care about the leaves."

Research on salt cedar has been scant, and as the plant has spread, people have assumed that it was choking out or even killing native plants. Davis' work may demonstrate that salt cedar is thriving where other plants can't survive because of boron contamination in water and soil.

McKinley, a junior in biochemistry, has worked with Davis for two years. She conducts experiments with salt cedar to test how much boron the plants can take.

That's where Barnes comes in. She is studying the channels in cell membranes that allow water and other particles into the plant, known as aquaporins, to see how they work in salt cedar. When she completes a new aquaporin model, she is hoping to determine whether salt cedar simply excludes boron or takes it up into its tissues. Another undergraduate in the Davis lab is exploring whether lipids in the roots explain the plant's boron resistance.

Understanding these mechanisms may lead to using salt cedar to help remove pollutants from water or soil, a process known as phytoremediation. Salt cedar could be planted in areas with boron-contaminated water, for instance, and allowed to take up the pollutant, then cut down and used for fuel.

Both McKinley and Barnes are participating in undergraduate research through Kansas State University's Developing Scholars Program. The program offers high-achieving, underrepresented students research experience along with academic, social and financial support. Barnes said the program helped her learn to manage her time and set priorities, plus develop her scholarly skills.

"The program allows you to network and have a developed scholarly education by the end of your undergraduate career," Barnes said. "I feel like I would be missing out on something had I not been doing the research."

McKinley agreed and said the lab experience has built her confidence.

"It gives you a lot of lab work experience in safety protocol and using the tools and machines. I can do the mass spectrometry, calculate molarity — I have physical experience for years doing this. I feel more confident in my skills working in a lab," McKinley said.

Davis supports the program and notes that 10 biochemistry majors are participating in the Developing Scholars Program. In addition, the department has created an endowment to support additional student researchers through the Developing Scholars Program and the Bridges program, which brings students with associate degrees from junior colleges in southwest Kansas to Kansas State University to study biomedical and behavioral sciences. Davis has offered both professional and financial support to the program.

"I was a first-generation student because neither of my parents went to college," Davis said. "I did research in high school and in college on a National Science Foundation grant. I had students from southwest Kansas taking biochem in our highest-level course for majors and they were good students. It seemed reasonable to help the program keep running," Davis said.

Biochemistry is a growing field, partially because the Medical College Admission Test emphasizes the field.

"Everything you look at, there's a drug for," Davis said. "Doctors have to understand how drugs interact and are metabolized. The tests on blood lipids and glucose and enzymes —that's all biochemistry. Every doctor has to understand biochemistry to interpret the tests and explain to patients what's going on."

Barnes and McKinley both hope to enter the medical field. Barnes wants to attend medical school and return to Salina to do family medicine and psychiatry, and McKinley plans to become a pharmacist and work in a hospital or conduct pharmacology research. Both would recommend that incoming freshmen seek out opportunities to engage in research and find a mentor like Davis.

"It's been wonderful to work with Dr. Davis and learn from him," Barnes said. "He is so knowledgeable, and he's patient and is good about explaining higher-level concepts to me. He can explain in ways I can understand or draw them out on paper. He involves me in conversations with other labs and helps me with networking. He's a wonderful mentor." 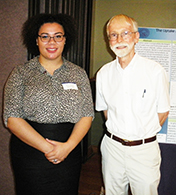