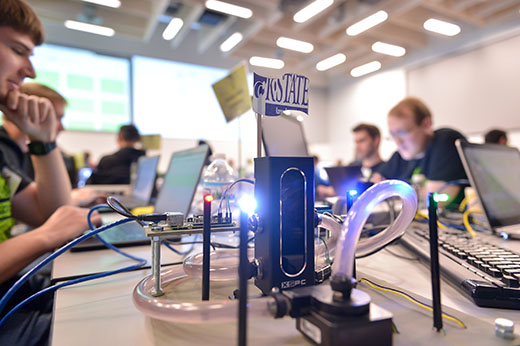 Colored lights show that Kansas State University's cyberdefense network is still safe and running at the Argonne National Laboratory's Cyber Defense Competition. The competition featured a real-life scenario and the university's Cyber Defense Club had to protect miniature water and power systems from cyberattacks. The club's power and water systems stayed on during the entire competition except for a brief downtime required by the competition. Photo credit: Wes Agresta, Argonne National Laboratory. | Download this photo.

Six members of the club tied for second place at the laboratory's second Cyber Defense Competition on April 1 in Lemont, Illinois. The competition included 15 teams from colleges and universities across the country. The Kansas State University students shared the second-place honor with Dakota State University, while the University of Illinois took first place.

"I'm very proud of our team," said Petrie, president of the Cyber Defense Club. "I am especially proud that we maintained a positive attitude, even when things started to go wrong. Our team fixed any problems, patted each other on the back and kept working. Mistakes are a part of competition. You fix them, learn from them, and keep working to accomplish the task."

The competition included a staged real-life scenario. Collegiate teams — called blue teams — had three weeks to create and design a cyberdefense network for a green team, which represented a utility company and its employees and customers. The collegiate teams set up their systems at Argonne National Laboratory, where a red team of professional hackers tried to infiltrate and disrupt the cybersecurity networks designed by the collegiate teams. The students had to defend their networks from cyberattacks while still providing services to the green team.

The collegiate teams were scored based on the security of their network as well as the accessibility of their services to members of the green team.

"These competitions give students practical, hands-on experience that you just don't get in the classroom," said Prough, safety and ethics officer for the Cyber Defense Club. "It's important to not only learn cybersecurity concepts, but also use and practice them in a realistic environment like these competitions so students are prepared to face real-world challenges."

The Cyber Defense Club has 26 members for the 2016-2017 school year. All members regularly train for competitions and contribute to the success of the team members who attend, said Eugene Vasserman, associate professor of computer science and faculty adviser to the club.

"I am proud of the team's success at the latest national competition, which followed several weeks of preparation, training and hard work from all club members," Vasserman said. "We would not be able to maintain our strong competition track record without the involvement of everyone in the Cyber Defense Club. Through guest speakers, training sessions and education activities, our members challenge each other to improve their skills and knowledge of cybersecurity. Our success is truly a team effort."

"We would not be able to maintain our strong competition track record without the involvement of everyone in the Cyber Defense Club. Through guest speakers, training sessions and education activities, our members challenge each other to improve their skills and knowledge of cybersecurity."