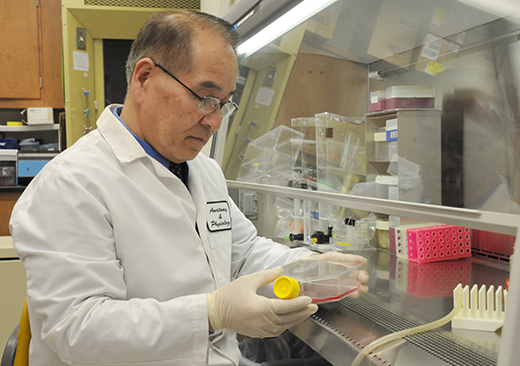 MANHATTAN —Lung cancer patients may one day be able to breathe a sigh of relief because of a new potential treatment for the disease. Kansas State University's Masaaki Tamura is collaborating on a National Institutes of Health-funded research project for a therapeutic compound that would be administered directly to the lungs in aerosol form.

"The standard treatments for lung cancer include chemotherapy, radiation and surgery," said Tamura, who is an associate professor of anatomy and physiology in the College of Veterinary Medicine and affiliate of the university's Johnson Cancer Research Center. "Cisplatin is a first-line chemotherapy for lung cancer, but intravenous delivery can be complicated by a variety of factors such as toxicities, poor penetration into tumors and lymph nodes, organ damage, and spontaneous drug resistance. Cancer becomes poorly responsive to chemotherapeutics after repetitive uses."

Chad Groer, chief science officer with Hylapharm in Lawrence, is the principal investigator on the project, which has received a $150,000 business development grant from the NIH. Hylapharm develops chemical-based therapeutics to treat cancer and partners with universities to test delivery methods and effectiveness of potential treatments and methods.

Tamura said Hylapharm approached him to collaborate on this project because of his expertise in lung cancer research.

"We have been collaborating since 2015 and already have one publication," Tamura said. "Lung cancer is the leading cause of cancer deaths with more than 200,000 new diagnoses made each year. We're hopeful the pulmonary delivery of aerosolized HylaPlat will be more efficacious and more tolerable than cisplatin delivered intravenously."

This method could prevent the spread of metastatic cancer, reduce the toxicity of chemotherapy and lessen the need for extensive surgical resection and radiotherapy, all of which cause irreversible harm to patients' health and quality of life, Tamura said.

The first phase of the project, titled "Aerosolized platinum nanoparticle chemotherapy for lung cancer," will position aerosolized HylaPlat for investigational new drug-enabling studies, after which Hylapharm will seek partnerships for phase one clinical trials with humans.