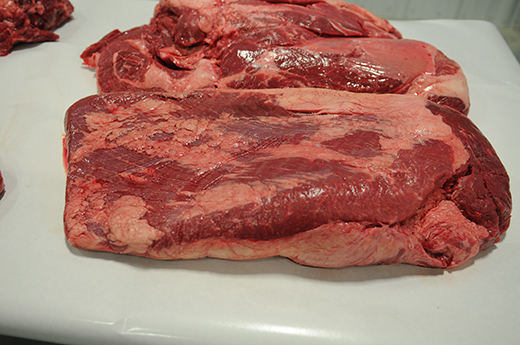 A Kansas State University study has found that the marbling texture of steak makes no difference to consumers in appearance and taste. Marbling is the amount of white, visible flecks of fat within the meat.

MANHATTAN— A Kansas State University study has found the marbling texture of steak makes no difference to consumers in appearance and taste of the food.

The marbling texture of meat is based on the amount of white, visible flecks of fat within meat.

Meat scientist Travis O'Quinn said the finding was surprising and that it countered previous beliefs that consumers preferred finely marbled meat, which has smaller specks but the same amount of fat, for tenderness and overall taste.

"Marbling texture had no impact on the consumer's perception of beef, not only from a visual standpoint but when they ate it as well," O'Quinn said.

The finding is significant because approximately 80 percent of the more than 100 branded beef programs available to consumers do not accept coarsely marbled beef.

This is the first scientific study to look at the impact of coarse marbling on a consumer's willingness to buy the product, according to O'Quinn.

"It's amazing to me when we talk about marbling texture and what is commonly held to be true in terms of fine marbling being better, that there hadn't been any other studies to evaluate this," O'Quinn said. "This was the task that we wanted to take up."

Each of the samples were tested by a consumer panel and a trained sensory panel, which were asked to evaluate the steaks for tenderness, juiciness and how much beef flavor was present. The consumers also were asked how much they liked the steak overall.

"Our goal was to create a very robust study evaluating this marbling texture and identifying any differences that may be present," O'Quinn said. "Our results showed that when we fed consumers the beef, they found no difference among the different marbling texture groups. They did find differences between choice and select, which we expected; they told us the choice was more tender, more flavorful and they liked it better overall."

The trained sensory panels did indicate that coarse marbled steaks were more juicy and flavorful than fine and medium marbled steaks, a finding that differed from the consumer panels.

In another part of the study, consumers completed an online study in which they viewed pictures of the steaks with differing levels of marbling. O'Quinn said the consumers were asked to judge how desirable the steak was and their willingness to purchase the steak, based solely on pictures.

"The results were the same," he said. "The consumers showed no preference for one marbling texture over another."

The data will become part of industry knowledge that could affect how branded beef programs are managed in the future.

"If consumers aren't willing to pay more for fine- or medium-texture beef, and they don't taste the difference, then there's really no reason to discriminate against those coarse marbled steaks," O'Quinn said. "If you're going to create a new branded beef program in the future, maybe you won't include marbling texture as part of your program's specifications."

Kansas State University researchers have found that consumers who participated in a taste panel indicated no difference in steaks based on marbling texture, the white, visible flecks of fat within the meat.

"Marbling texture had no impact on the consumer's perception of beef, not only from a visual standpoint but when they ate it, as well."