Doctoral student's research looks at cause of neurodegenerative disease 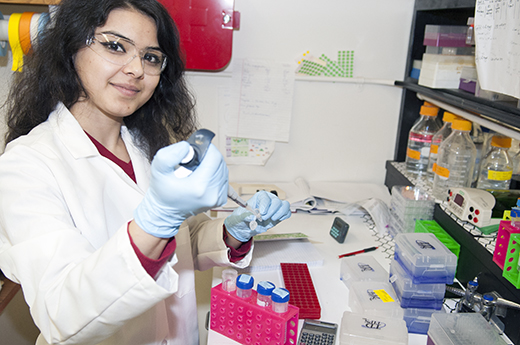 Babita Adhikari Dhungel, doctoral student in biology, is researching the cause of CLN8 disease, which is a form of neuronal ceroid lipofuscinoses, a hereditary disease that causes seizures, vision problems and impaired movement. | Download this photo.

MANHATTAN — A Kansas State University student hopes her research on a currently untreatable and progressive neurodegenerative disease will one day lead to treatment options.

Babita Adhikari Dhungel, doctoral student in biology from Nepal, is researching the cause of CLN8 disease, which is a form of neuronal ceroid lipofuscinoses. This hereditary disease causes damage to the retina, which eventually leads to blindness, sleep problems, seizures, reduced intellectual ability and problems in coordinating movements, including eventual immobilization.

Adhikari Dhungel has found that levels of ceramide, a biochemical compound that is present in healthy human cells, is reduced by 60 percent in cells of people who have the disease. The next phase of her research will investigate why this reduction occurs.

"I hope that my research will lead to therapy options for this disease," said Adhikari Dhungel, who recently presented the research at Kansas State University's Three Minute Thesis Competition and the Division of Biology's Molecular Cellular Development Biology Forum.

Stella Yu-Chien Lee, assistant professor of biology and Adhikari Dhungel's adviser for this project, said the disease is most common in Finland, where 1 in 10,000 people are diagnosed. It also has been found in other populations, such as Turkey, Italy, Germany, Pakistan, Israel and recently in Japan. Though it is still rare worldwide, with just 10 published cases per 100,000 people, the disease is becoming more prevalent.

"With advanced genetic diagnosis, more CLN8 disease patients will most likely be identified, so the need for a treatment is growing," Lee said. "Babita is laying the foundation for research that could help the medical field to eventually develop a treatment."

Adhikari Dhungel also is working to find the link between two other problems present in cells of people who have the disease: a malfunctioning of the CLN8 protein and a glitch in the lysosome, which Adhikari Dhungel describes as the cell's garbage disposal.

"When the lysosome quits working, it's like waste management employees going on strike — trash accumulates," Adhikari Dhungel said. "In the same way, when lysosomes are unable to carry out their function, waste accumulates."

Previous research has shown a correlation between that process and the occurrence of CLN8 disease. Adhikari Dhungel wants to know how the malfunctioning protein is related to the lysosome because the protein and the lysosome are in different parts of the cell.

"The protein never reaches the region of the cell where the lysosome is located, but it appears that they are affecting each other, or possibly there are additional players involved," Adhikari Dhungel said. "We have some hints about the causes of this disease, and my research aims to connect the hints."