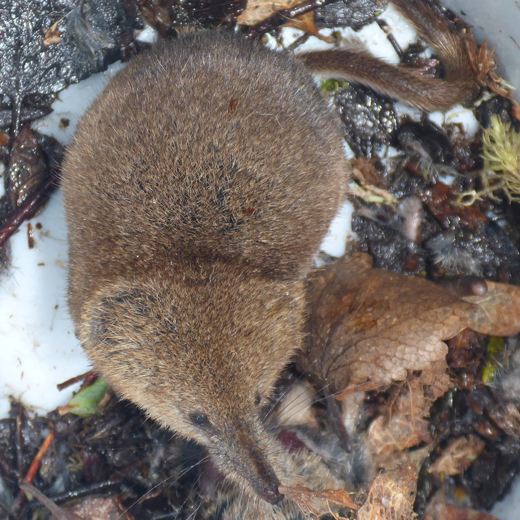 The forest-dwelling masked shrew is host to many varieties of parasites and pathogens, and together they could be the world's newest indicators of environmental change, according to a Kansas State University researcher's study in NOAA's 2016 Arctic Report Card. | Download this photo.

MANHATTAN — The shrew and its parasites — even 40-year-old preserved ones — are the new indicators of environmental change, according to a Kansas State University researcher.

Andrew Hope, Kansas State University research assistant professor in the Division of Biology, and his colleagues across the U.S. have published "Shrews and Their Parasites: Small Species Indicate Big Changes" in the National Oceanic and Atmospheric Administration's 2016 Arctic Report Card. The study indicates an expansion in the range of the forest-dwelling masked shrew in Alaska, while the range of its tundra neighbor to the north, the barren ground shrew, constricts and fragments whenever the climate warms.

According to Hope, the pointy-nose, often overlooked small insectivores are good indicators of environmental changes because they are found around the world and share space with large animals. Shrew population shifts can reflect changes in species that are more familiar to people but harder to work with, like caribou and moose, he said. The invasion of the masked shrew into the barren ground shrew's territory also brings with it parasites and pathogens that can be transmitted among different shrews and possibly to other animals.

"Each shrew carries within it or on it whole communities of other species," Hope said. "Most people don't know what a shrew is but they are an important part of community dynamics around the world. We can use small mammals, like shrews, as a tool to understand the processes of change. Taking it a step further, we learn how parasites and pathogens spread through the environment."

The researchers are using field collections of shrews archived in museums to understand how the populations of shrews and their parasites change in response to changes in the environment. From these collections, the researchers can tell that this is not the first time the climate has warmed and the barren ground shrew's range has constricted — but the current rate of that change is unprecedented.

"The tundra community has survived previous warm periods, and then expanded back out again when it got cold," Hope said. "We are at a point now where it is as warm as it ever was in the history of these species and we're moving into a phase that's unknown."

Hope said that they used data from the last 20-30 years to predict the near future, but recording good data from shrews is complex. It requires getting all their parts — bones, organs, parasites and the hide — from field collections and preserving them in museums and research institutions so that people can use them for science now and in the future. With advances in genomics technology, they can use the shrews' DNA to determine species range, population size and responses to environmental change. Then they can make predictions for the next 50-100 years based on what scientists have determined about future climate change.

"We use small mammals, shrews in particular, because they are there all the time," Hope said. "They are a permanent part of the landscape and are better indicators of change than caribou or birds that migrate every year to avoid the worst conditions. The changes are literally recorded in their DNA."

Since shrews are so small, biologists often placed the whole body in ethanol, which preserved even the intestinal parasites and pathogens.

"Now, we can take shrews that are 40-50 years old from a vat of ethanol and basically sequence everything they ate, all the parasites inside them, and then look on the outside for more parasites plus get genetics of the shrew itself," Hope said. "We can begin to recreate their diets and their parasite communities from decades ago and then compare that with the ones now."

According to Hope, even a shrew skin that has been in a museum collection for more than 20 years may retain its parasites, such as lice and ticks, which can be a gold mine for researchers' understanding of co-evolutionary history of species.

"We can go back and comb through a preserved skin from 20 years ago and pick out the parasites," Hope said. "We look at historic specimens and the relationships with parasite communities; they may still have tapeworms but they may be different ones than today's specimens, telling us about how communities change through time."

Based on Alaska's climate information and the genetic data collected from the specimens from 1981-2010, Hope and his colleagues predict further expansion north of the masked shrew and fragmentation of the barren ground shrew's range, with a lot of overlap by 2020 and continued range constriction of the barren ground shrew by 2080. As overlap increases, so do the interactions among these different communities.

"We are utilizing these components of biodiversity together and getting really comprehensive samples from a broad range," Hope said. "This gives us a much fuller picture from organisms that we don't think about to help us understand organisms that we care more about, such as economically important species — including humans."

Andrew Hope, Kansas State University research assistant professor in the Division of Biology, is part of a study published in the 2016 NOAA Arctic Report Card that suggests that shrews and their parasites may be good indicators of environmental change and changes in large animal communities.

"Now, we can take shrews that are 40-50 years old from a vat of ethanol and basically are sequence everything they ate, all the parasites inside them and then look on the outside for more parasites plus get genetics of the shrew itself. We can begin to recreate their diets and their parasite communities from decades ago and then compare that with the ones now."