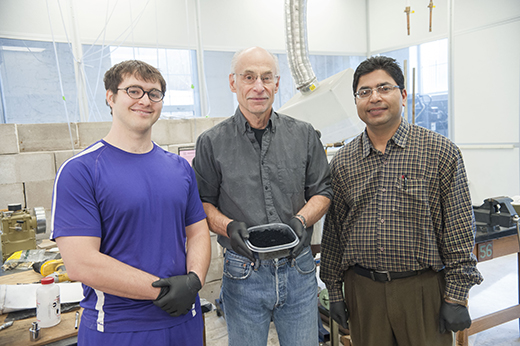 MANHATTAN — Forget catalysts and expensive machinery — a Kansas State University team of physicists has discovered a way to mass-produce graphene with three ingredients: hydrocarbon gas, oxygen and a spark plug.

Their method is simple: Fill a chamber with acetylene or ethylene gas and oxygen. Use a vehicle spark plug to create a contained detonation. Collect the graphene that forms afterward.

"We have discovered a viable process to make graphene," Sorensen said. "Our process has many positive properties, from the economic feasibility, the possibility for large-scale production and the lack of nasty chemicals. What might be the best property of all is that the energy required to make a gram of graphene through our process is much less than other processes because all it takes is a single spark."

Graphene is a single atom-thick sheet of hexagonally coordinated carbon atoms, which makes it the world's thinnest material. Since graphene was isolated in 2004, scientists have found it has valuable physical and electronic properties with many possible applications, such as more efficient rechargeable batteries or better electronics.

For Sorensen's research team, the serendipitous path to creating graphene started when they were developing and patenting carbon soot aerosol gels. They created the gels by filling a 17-liter aluminum chamber with acetylene gas and oxygen. Using a spark plug, they created a detonation in the chamber. The soot from the detonation formed aerosol gels that looked like "black angel food cake," Sorensen said.

But after further analysis, the researchers found that the aerosol gel was more than lookalike dark angel food cake — it was graphene.

"We made graphene by serendipity," Sorensen said. "We didn't plan on making graphene. We planned on making the aerosol gel and we got lucky."

But unlike other methods of creating graphene, Sorensen's method is simple, efficient, low-cost and scalable for industry.

Other methods of creating graphene involve "cooking" the mineral graphite with chemicals — such as sulfuric acid, sodium nitrate, potassium permanganate or hydrazine — for a long time at precisely prescribed temperatures. Additional methods involve heating hydrocarbons to 1,000 degrees Celsius in the presence of catalysts.

Such methods are energy intensive — and even dangerous — and have low yield, while Sorensen and his team's method makes larger quantities with minimal energy and no dangerous chemicals.

"The real charm of our experiment is that we can produce graphene in the quantity of grams rather than milligrams," Nepal said.

Now the research team — including Justin Wright, doctoral student in physics, Camp Hill, Pennsylvania — is working to improve the quality of the graphene and scale the laboratory process to an industrial level. They are upgrading some of the equipment to make it easier to get graphene from the chamber seconds — rather than minutes — after the detonation. Accessing the graphene more quickly could improve the quality of the material, Sorensen said.

The patent was issued to the Kansas State University Research Foundation, a nonprofit corporation responsible for managing technology transfer activities at the university. 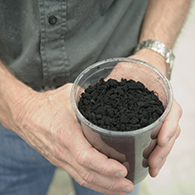 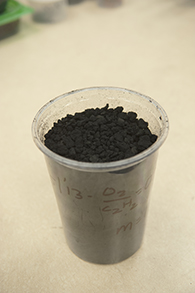 The 13 grams of low-density graphene aerosol gel in this container were created by hydrocarbon detonation method recently patented by a Kansas State University team of physicists.

A Kansas State University team of physicists has patented a detonation technique that can mass-produce graphene with three ingredients: hydrocarbon gas, oxygen and a spark plug.

"We have discovered a viable process to make graphene. Our process has many positive properties, from the economic feasibility, the possibility for large-scale production and the lack of nasty chemicals."