Sidebar: Entomologists share some of the latest buzz on ways to keep bees around

MANHATTAN — Gardening or taking up the hobby of beekeeping are two ways to help protect declining bee populations, according to Kansas State University entomologists.

When it comes to gardening, Holly Schwarting, research associate in entomology, recommends growing patches of plant species that attract bees to create a bee garden, which is like the more common concept of a butterfly garden. Bees are especially attracted to poppies, black-eyed Susans and other plants with wide, shallow blossoms, but Schwarting said gardens of any kind could help provide areas for bees to pollinate and congregate. Even miniature parks, which are popping up in the middle of cities as part of the urban gardening trend, are helpful to pollinator populations, she said.

Schwarting also recommends planting native species of flowers instead of exotic ones. "Bees are more likely to pollinate native plants than exotic ones they might not recognize," she said.

Another way to sustain bee populations is through beekeeping, which can be done in both rural and urban areas, said Jeff Whitworth, associate professor of entomology at Kansas State University.

Both Whitworth and Schwarting said beekeeping has increased in popularity in the last 10 years. The researchers attribute the beekeeping buzz to the back-to-nature movement, which is hallmarked by a desire to grow one's own food and turn to nature for remedies, such as eating local honey versus store-bought versions to ward off allergies.

"Some people are doing beekeeping as a fun hobby, and others are drawn to it because they feel like they are providing an environmental service by boosting bee populations," Schwarting said. "It's all about going organic and making your own food. There's something likeable about growing your own honey in your own backyard."

Whitworth said beekeeping is especially positive for children because it teaches them that not all insects are bad, to be careful around venomous organisms and to exercise responsibility in taking care of pets. The Kansas State University entomology department provides information upon request for how to start bee colonies, apiaries and orchards. 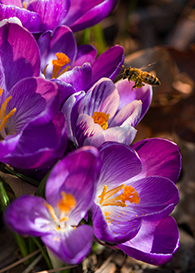 A bee hovers over a group of flowers. Planting flowers that attract bees is one way to boost and help sustain bee populations, according to Kansas State University entomologists.