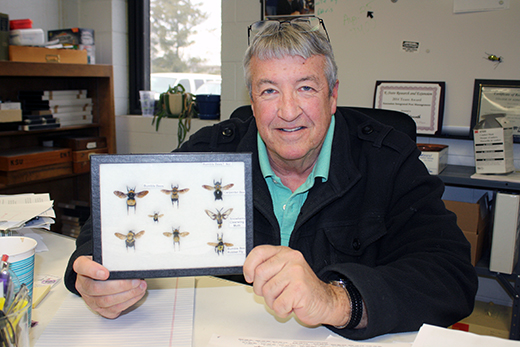 MANHATTAN — The rusty patched bumblebee, Bombus affinis, recently became the first U.S. bumblebee species to be placed on the endangered species list, but a Kansas State University entomologist says bumblebee endangerment is nothing to be bugged about.

Jeff Whitworth, associate professor of entomology, said bumblebees are not headed for extinction. However, their populations have decreased in some states, so inclusion in the U.S. Fish and Wildlife Service's Federal Register may help keep them and other bee species at healthy population levels.

"Being on the endangered species list is not bad," Whitworth said. "It helps people have more awareness and information about bees, and it leads to regulations and programs that help keep bees alive."

Some people fear bees because they occasionally sting, but Whitworth said bees will not bother people if people do not bother them. He said bees are beneficial because they pollinate flowers, citrus crops and vegetables, and they serve as food sources for other insects, birds and fish.

"If bees go away, other organisms go away, too," Whitworth said. "It's a domino effect."

Bee declines are attributed to a variety of factors, including parasites, pesticides and urbanization, as well as fungal, bacterial and viral diseases. They also are affected by the introduction of non-native plant species and natural disasters, from floods to drought.

Whitworth said bee populations could be protected by areas of native plants and grasses, conservation-focused farming and gardening methods, and the hobby of beekeeping, which is growing in both rural and urban areas. These protective practices help turn one's backyard — even a little piece of it — into a natural ecosystem.

To boost a backyard's "natural factor," Whitworth advises less frequent mowing and tree trimming. Less mowing means less soil disturbance, which is critical for bumblebees because they nest in the ground in mouse and gopher holes. Less tree trimming provides pollinators with more of a natural habitat, which is especially helpful for honeybees because they create colonies in trees.

Growers can help sustain bumblebee populations through no-till farming and gardening, as well as participation in the Farm Service Agency's Conservation Reserve Program, which provides landowners with rental payments in exchange for their commitment to abstain from agricultural production on a portion of their property.

Whitworth predicts bee populations will continue to experience cycles of increase and decrease because of fluctuations in agriculture prices and year-round temperatures.

"Weather and prices vary from year to year, which is simply part of the way systems work," Whitworth said. "I foresee bee populations staying fairly steady for the foreseeable future."

Bumblebees recently became the first species from the U.S. to be placed on the endangered species list, but a Kansas State University entomologist said bumblebee endangerment is nothing to be bugged about.

"If bees go away, other organisms go away too. It's a domino effect."