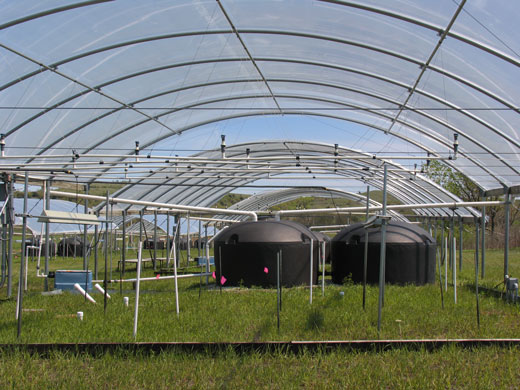 Infrared heaters, the triangular structure on the left of the Rainfall Manipulation Plots, or RaMPs, heat sections of tallgrass prairie at Konza Prairie Biological Station to determine the effects of global warming on the storage of carbon in soil. Kansas State University researchers have used the RaMPs to assess the effect of climate change since 1998. | Download this photo.

The study, "Quantifying global soil carbon losses in response to warming," recently published in Nature, predicts that soils may release large quantities of carbon dioxide in response to warming, leading to even faster rates of warming globally. The authors, who include Kansas State University's John Blair, university distinguished professor of biology and director of the NSF-funded Long-Term Ecological Research program at Konza Prairie, used data from 49 sites in different ecosystems around the world.

According to the collaborative study, led by Tom Crowther at Yale University, Arctic soils containing large amounts of soil carbon are the most sensitive to warming and will release the most carbon dioxide into the atmosphere. The study also found the carbon stored in temperate grassland soils, such as Konza Prairie, is much less sensitive to comparable warming.

"Globally, soils hold more than twice as much carbon as the atmosphere, so even a relatively small increase in release of carbon from the Earth's soils can have a large impact on atmospheric greenhouse gases and future warming," Blair said. "Tallgrass prairie holds more soil carbon than other grasslands in the Central Plains of North America, but the greatest amounts of soil carbon globally are stored in colder high-latitude ecosystems, such as boreal forests and tundra, where it has accumulated over thousands of years."

According to the study, soils in the Arctic ecosystems are the most susceptible to releasing stored carbon when warmed, which could drive further global change and upset the delicate balance in the carbon cycle, resulting in carbon feedback instead of sequestration. The study was the first to compile data on responses of soils to warming from field experiments in a variety of ecosystems for a global view of soil carbon's sensitivity to warming.

"The real power in the study is using a network of sites including grasslands to address the relative sensitivities of these different ecosystems," Blair said. "Scientists working independently can say something about how responsive or how sensitive their specific ecosystems are but it really takes an analysis of data from multiple sites and multiple ecosystems to draw robust conclusions about how warming will affect global carbon cycling."

The warming study at Konza Prairie — an 8,600-acre native tallgrass prairie research station jointly owned by Kansas State University and The Nature Conservancy and managed by the university's Division of Biology — is part of a larger ongoing project that has been assessing the effect of climate change since 1998. Konza Prairie researchers used infrared heaters to raise the ground temperature by approximately one degree Celsius, which, Blair said, is well within the current prediction for climate change in the next several decades. The Konza study also monitors changes in plant communities, plant productivity, and soil carbon and nitrogen, and has resulted in a number of papers on tallgrass prairie responses to climate change.

For the Nature paper, researchers measured the carbon stored in soil core samples before and after warming. While there was little change in soil carbon at Konza Prairie and other grassland sites in response to warming, the soils in colder high-latitude ecosystems lost large amounts of carbon. Globally, the predicted release of carbon dioxide from all soils could exceed 55 trillion kilograms of carbon by 2050, or about 17 percent more than projected emissions because of human-related activities.

"This study and others like it highlight the importance of the soil carbon pool globally," Blair said. "What we know from this study is that warming will result in the loss of stored carbon in a wide variety of ecosystems — and that has potentially harmful effects in terms of future global warming. At the same time, it also highlights the potential role that the soil could play in storing carbon and helping to mitigate climate change."

Although it wasn't addressed by the Nature study, Blair said that developing land management practices that promote the storage of soil carbon is one way of combating some of the increases in carbon dioxide in future climate change.

John Blair, Kansas State University distinguished professor and director of the Long-Term Ecological Research program at Konza Prairie Biological Station, is part of an international study that used data from 49 sites in different ecosystems around the world to measure the effect of warming on soil carbon.

"This study and others like it highlight the importance of the soil carbon pool globally. What we know from this study is that warming will result in the loss of stored carbon in a wide variety of ecosystems —and that has potentially harmful effects in terms of future global warming. At the same time, it also highlights the potential role that the soil could play in storing carbon and helping to mitigate climate change."