Feathered fathers and mothers have diverse parenting arrangements, according to research in Nature 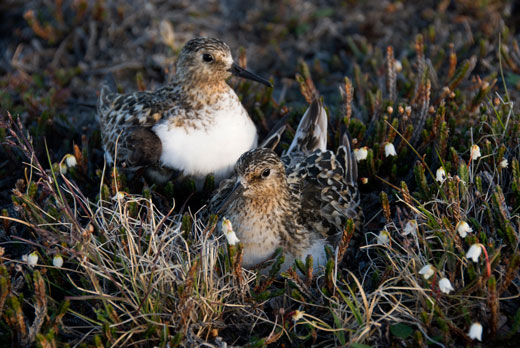 Kansas State University ornithologists contributed field data to help show diversity in parenting responsibilities among 32 species of shorebirds worldwide. Sanderlings, like the mated pair pictured at a nest in Greenland, had incubation bouts about three to six hours long. Photo courtesy of Jeroen Reneerkens at the University of Groningen. | Download this photo.

MANHATTAN — Birds of a feather flock together but they schedule parenting duties differently, according to a Kansas State University researcher.

Brett Sandercock, professor in the Division of Biology, and Eunbi Kwon, Kansas State University alumna and postdoctoral researcher at Virginia Tech University, are part of an international team of ornithologists who have published "Unexpected diversity in socially synchronized rhythms of shorebirds" in the Dec. 1 issue of Nature. According to the research, mated pairs of wild shorebirds have established diverse schedules for parental care of the nest.

"Understanding the ecology of these birds and appreciating the diversity of the different ways they are all solving the same problem — how do males and females work together to coordinate their activities at the nest — is the reason this is appearing in Nature," Sandercock said. "Until this work was done, there really was no appreciation of this incredible diversity in strategies across this interesting group of birds."

The complete study included data from 729 nests of 32 shorebird species in 91 populations worldwide. Most of the shorebirds in the study lay three to four eggs in a ground nest and cover their eggs continuously so that one mate is responsible for the nest during a particular period, called an incubation bout. The majority of the shorebirds exchanged parenting duties within a range of every other hour to every 24 hours. A few incubation bouts lasted for up to two days on the nest before the parents switched. 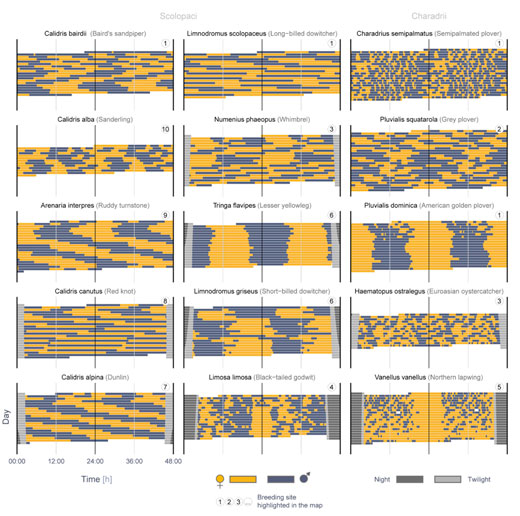 The figure shows 15 different patterns for each parent's time on the nest over 48 hours — females are depicted in yellow and males are in grey. Incubation bouts ranged from less than three hours to up to 48 hours. | Download this photo.

"There is excitement and interest in trying to understand rhythms in animals," Sandercock said. "The incredible diversity we see across multiple species and sites within the species opens doors for a bunch of future work to explain mechanisms underlying biological rhythms."

The researchers used data from light-sensitive tags, called geolocators, to detect when the birds were sitting on the nest — an unconventional use for the tags because they are normally used to track migratory movements. Sandercock and Kwon contributed data for Arctic shorebirds that nested at Nome, Alaska, from 2011-2015 to the international project. In the Arctic, where there is constant daylight, the tag on the bird's leg would be shaded while sitting on the nest and lighted while foraging during the partner's turn to sit. Using the data in this way gave researchers exact timing for partners' rotation on and off the nests.

"Most of the bird species in the study are socially monogamous, so a male and a female are working together to incubate the clutch," Sandercock said. "The same behavioral patterns might be described in human terms when parents with young children make decisions for division of parenting duties such as dropping off or picking up their kids at grade school."

Sandercock said that there are most likely many reasons worth researching about why the birds' parenting schedules vary. Potential reasons include predation risk, nest location and evolutionary history.

"There are enormous challenges for birds that are breeding in the high Arctic and biological rhythms run amok under constant daylight," Sandercock said. "The high Arctic breeders' biological rhythms can get out of sync because they can't synchronize their timing to a day-night schedule. Predation also may cause varying incubation bouts for ground-nesting birds. If the parents rarely leave the clutch, the nests are harder to find."

Sandercock and Kwon are part of the Arctic Shorebird Demographic Network, an international program of researchers who are collecting data on long-distance migrant shorebirds at a network of Arctic sites across Alaska and northern Canada.

"Most of the bird species in the study are socially monogamous, so a male and a female are working together to incubate the clutch. The same behavioral patterns might be described in human terms when parents with young children make decisions for division of parenting duties such as dropping off or picking up their kids at grade school."