Physicists film first 'tango' of an electron pair in an atom 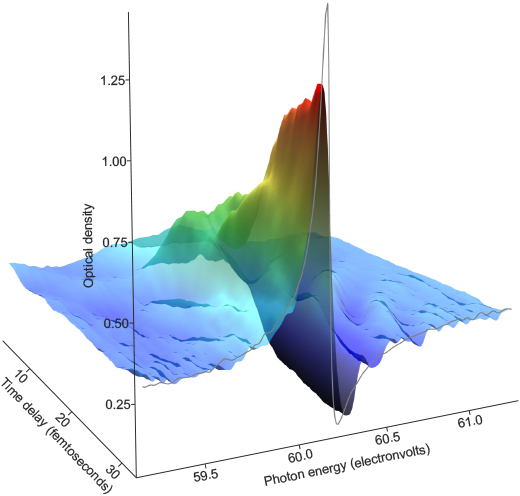 This image shows the buildup of Fano resonance created by a short laser pulse. The asymmetric curve was described by Fano in 1961. Kansas State University researcher Chii-Dong Lin's 2010 theory for measuring light absorption spectra of atoms was validated by a recent experiment. Results are published in the Nov. 11 issue of Science.Image courtesy of Max Planck Institute for Nuclear Physics. | Download this photo.

MANHATTAN — Think of electrons as dancers that move too quickly to photograph. If you succeed in recording their tango, you change their paths or destroy them. So how do you capture the entangled dance of two electrons before one breaks away when your best camera's shutter speed is 10,000 times too slow?

An experiment proposed by a Kansas State University physicist and executed by an international team has succeeded in demonstrating how very short laser pulses can facilitate the filming of such an event. The results were published in the Nov. 11 issue of Science.

Chii-Dong Lin, university distinguished professor of physics, said the technology could have far-reaching implications for shaping and managing molecules.

"The days for scientists to dissect and manipulate a molecule at the level of one atom or one bond length at a time will come sooner rather than later," Lin said. "Enabling control of electrons or atoms at their own natural timescale means synthesis of molecules will take on a new meaning."

New methods of molecular synthesis could revolutionize medicine, for example.

"It's farfetched in this moment, but when the day arrives that one can manipulate individual molecules at the atomic level, the drugs that we use for treating ailments today will become so medieval. Progress in science and technology is only limited by the lack of imagination," Lin said.

The filming was based on a paper Lin published in 2010 to offer a theory for measuring the transient light absorption patterns, or spectra, of an atom. Lin drew on the work of his doctoral advisor at the University of Chicago, Ugo Fano, who explained the pattern of spectral absorption that took on his name. According to this pattern, light is usually weakly absorbed by atoms, but at certain wavelengths sharp peaks appear in the spectra. Those peaks are called Fano resonances, and they occur because light is trapped in matter for a very short time before it is reemitted. For nearly a century, time information of the resonance could be inferred only from the time-energy uncertainty in quantum mechanics. The resonance usually lasts for only a few femtoseconds — one femtosecond is one-millionth of a billionth of a second — which is about 10,000 times shorter than the best detector can measure.

"Nanotechnology isn't just about small size — the time has to be shorter as well," Lin said. "Lasers as short as a few femtoseconds have become available in the last 10 or 15 years. As a scientist, one has to ask what new things can be done. The simple question we asked in 2010 was whether we could use such lasers to help film the evolution of a Fano resonance."

The team from the Max Planck Institute for Nuclear Physics and Vienna University of Technology, along with Lin and Hui Wei, doctoral student in physics from Kansas State University, measured and identified the buildup of a Fano resonance in the helium atom. They used two ultrashort laser-controlled flashes of light to excite two electrons, then a second near-infrared flash to trigger ionization, which ends the electrons' dance. Varying the time delay between the two laser pulses created what the researchers termed a "temporal gate" that helped them chart the evolution of the Fano resonance line shape in real time.

Lin and Wei interpreted the group's experimental data and were pleased to see that the experiment matched Lin's theory.

"As a theorist, you predict something, but you need to do the experiment to show it. When the two agree, then people believe it. It's very satisfying," Lin said.

"As a graduate student, it was a delightful experience to spend a few weeks to work out the details of the theory to confirm the experimental results. I was able to take advantage of this rare opportunity because I got a broad education at K-State," Wei said.

The "temporal gate" technology developed in the experiment will help scientists gather further insights from looking inside molecules on their own few-femtosecond timescale. By fine-tuning the tools that deliver very short laser pulses, scientists may also be able to control how atoms move.

Lin's research at the J.R. Macdonald Laboratory is supported by the U.S. Department of Energy, Office of Science. The department of physics is in the College of Arts & Sciences.

An experiment proposed by a Kansas State University physicist and executed by an international team has succeeded in demonstrating how very short laser pulses can facilitate the filming of such an event. The results were published in the Nov. 11 issue of Science.

"The days for scientists to dissect and manipulate a molecule at the level of one atom or one bond length at a time will come sooner rather than later. Enabling control of electrons or atoms at their own natural timescale means synthesis of molecules will take on a new meaning."