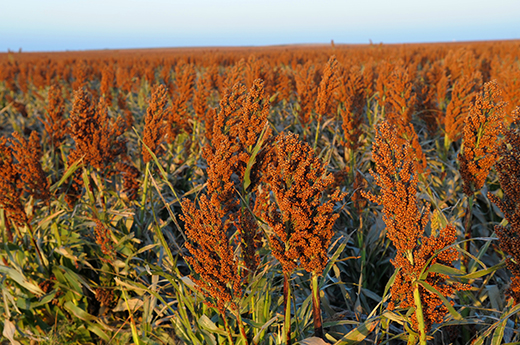 Kansas State University will lead a $1.08 million project to establish a sorghum breeding program in Haiti where nearly 200,000 farmers rely on the crop as a source of food and income. | Download this photo.

MANHATTAN — In an effort to address challenges faced by sorghum farmers in Haiti, the U.S. Agency for International Development has awarded Kansas State University $1.08 million to establish a genomics-assisted sorghum breeding program in the small Caribbean country.

The award, led by the Feed the Future Innovation Lab for Collaborative Research on Sorghum and Millet, will consist of three subprojects aimed at building the foundation of a breeding program that taps into the latest in technological advances to tackle some of Haiti's greatest constraints in sorghum production.

"This project is novel and exciting as it begins to assess our abilities to more surgically adapt and develop new sorghum varieties for Haiti," said lab director Tim Dalton.

The USAID grant, awarded through its Feed the Future initiative, will support the existing program at the CHIBAS Foundation, a bio-energy and sustainable agriculture research center in Haiti. Complimentary research also will be conducted at Kansas State University and Cornell University.

Sorghum is grown widely in Haiti — most commonly as a subsistence crop — with an estimated 200,000 farmers dependent on it as a food and income source.

But as one of the poorest countries in the Western Hemisphere, Haiti faces numerous constraints in establishing a strong breeding program, including a lack of resources, stressful growing environments and limited ability to improve crops in the field or lab.

Dalton said those challenges underscore the importance of genomics-assisted breeding, a process by which scientists choose which plants to crossbreed based on their DNA sequence. Once established, the process can save significant time and resources in developing new varieties that are better adapted to the local stresses and preferences.

"Today, plant breeders are taking existing genetic differences that might have arisen in a farmer's field in Africa or Asia or in Kansas hundreds or thousands of years ago, identifying which ones might be useful for breeders in the future, and using standard breeding methods of crossing varieties to each other," said Geoffrey Morris, Kansas State University assistant professor of agronomy who was awarded $201,600 to lead one of the three projects.

Morris said genomics-assisted breeding links a plant's genes to its desired traits so that breeders can select for those genes from the beginning and develop a superior variety in much less time.

"We're using the genetics to follow the favorable genes during the breeding process," he said.

While the award is specific to developing a program in Haiti, the work is part of a broader effort to improve sorghum production in numerous countries around the world through the Feed the Future program. Dalton said those efforts are likely to produce benefits for U.S. agriculture.

"Working in Haiti will provide opportunities to work year-round on important pests like the sugarcane aphid or in droughty and hot climates," he said. "While the goals focus on strengthening Haiti's breeding system, the experience and insight will spill over into the U.S. for the benefit of local producers. The tools developed for this project will be useful as we tailor sorghum varieties for our own micro-ecologies ranging from the Carolinas to the Great Plains."

Feed the Future is the U.S. government's global hunger and food security initiative. With a focus on smallholder farmers, particularly women, Feed the Future supports partner countries in developing their agriculture sectors to spur economic growth and trade that increase incomes and reduce hunger, poverty and undernutrition.

Kansas State University has received $1.08 million from the U.S. Agency for International Development to advance sorghum breeding in Haiti.

"While the goals focus on strengthening Haiti's breeding system, the experience and insight will spill over into the U.S. for the benefit of local producers."