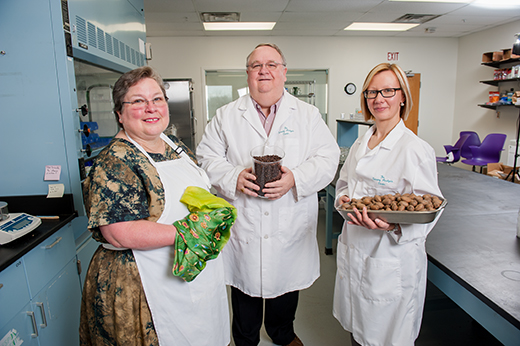 "This is such an easy thing to do: Just add the information to the recipe and people follow it," said Edgar Chambers, who is also a university distinguished professor of food, nutrition, dietetics and health. "It's a simple way to reduce foodborne illness and we can actually reduce health care costs by simply adding information to recipes. It's a great finding and a great piece of information for the promotion of food safety information."

Chambers and his research team – including researchers at Tennessee State University and RTI International in North Carolina — have published the research in the Journal of Food Protection. They presented the results to the U.S. Department of Agriculture, which intends to start including these food safety instructions in recipes that it develops, Chambers said.

The four-year collaborative project is supported by a $2.5 million USDA grant. The researchers have spent three years studying consumer shopping and cooking behaviors. Now the researchers are spending the fourth and final year working with the Partnership for Food Safety Education in Washington, D.C., to develop a nationwide food safety campaign. The researchers want to educate consumers, manufacturers, grocers, journalists, magazines and publishers on the importance of including food safety instructions in published recipes.

"We want to provide research-based information for consumers," Chambers said. "The goal is to promote safe behaviors so that people actually begin to do them every day in the kitchen and as part of their shopping behavior."

The project focused on several areas of food safety with poultry and eggs, including using meat thermometers, washing hands frequently and storing meat in plastic bags provided by the grocery stores.

The researchers observed 75 people cook two dishes — a Parmesan chicken breast and a turkey patty with mushroom sauce — following recipes that did not have food safety instructions. Another group of 75 participants cooked the same dishes following recipes that did include food safety instructions. The dishes required the participants to handle raw meat, eggs and fresh produce while scientists observed how often the participants washed their hands or used a meat thermometer.

"This is such a wonderful outcome," Chambers said. "It's such an easy thing to do and such an easy way to help people remember to be safe. It doesn't cost anything — just a little extra paper and a little extra time to wash your hands and use that thermometer."

"We have shown through research that changing to more modern lighting in kitchens makes people believe their meat patties are done sooner than they would be under old lighting, which is wrong," Chambers said. "That is not good news for consumers unless they are using a meat thermometer."

The researchers recently published the lighting-related research in the Journal of Sensory Studies.

The Sensory Analysis Center is an internationally recognized research institute that conducts consulting, education and consumer sensory research on a variety of products and topics.

"This is such an easy thing to do: Just add the information to the recipe and people follow it. It's a simple way to reduce food borne illness and we can actually reduce health care costs by simply adding information to recipes."