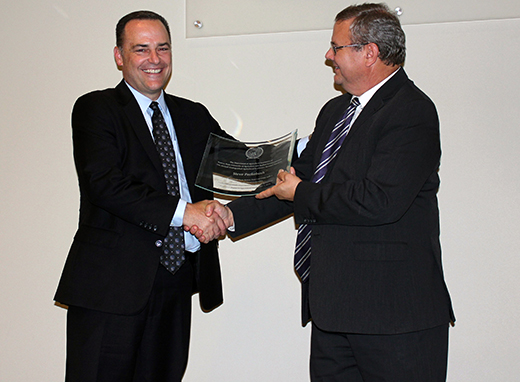 Packebush earned his bachelor's degree in agricultural economics in 1987. He began his career at Koch Industries and attributes his rise in the ranks to his passion for agriculture business.

"Agriculture is a good industry career," he said. "The world's population is increasing from 7 billion to 9 billion, and the world is getting wealthier. Yearly, more people globally are entering the middle class and they are consuming more protein. Higher grain and protein prices mean the farmer is going to make money manufacturing protein, and the entire agriculture value chain will benefit."

Allen Featherstone, head of the agricultural economics department, says he appreciates Packebush's perspective from both an industry and alumni standpoint.

"We appreciate his contributions to the ag business industry, and he serves as a positive role model to our students," Featherstone said.

At the recent award ceremony, Packebush shared some of his experiences with current agricultural economics students, including his core principles for success that have guided him throughout his career, the importance of maintaining balance in your life and the need for humility.

"Constantly look for good mentors as you build your skill set and draw as much knowledge out of them as possible," Packebush told students. "No matter who you work for, always remember you can learn something from these individuals; sometimes it is learning what not to do. Also, over your career, try to get some international experience. The world of agriculture is a global market and you will be better served if you understand the global market and cultural drivers that are outside the borders of the U.S."

Packebush said new technologies and consolidation are changing how business is being done in agriculture at an accelerated pace.

"Whether it is GMOs, biological, big data, the internet of things, new water technologies, or one of the many consolidations happening in the industry, agriculture is changing — and changing at a breathtaking pace," he said. "It's exciting and rewarding to be in this industry with great people and knowing that it is helping feed the world's growing population."

Koch Ag & Energy Solutions, based in Wichita, is involved in the agriculture and energy sectors, and includes subsidiaries Koch Fertilizer LLC, Koch Agronomic Services LLC, Koch Energy Services LLC and Koch Methanol LLC. Koch Fertilizer and its affiliates are among the world's largest manufacturers, marketers and distributors of fertilizer products.