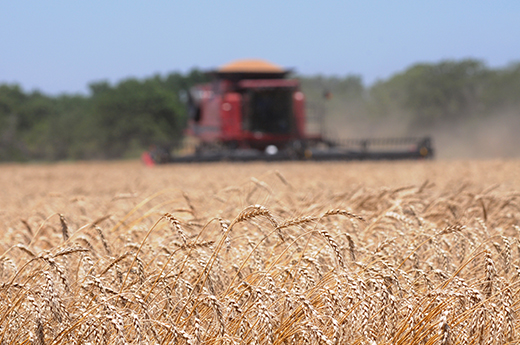 Wheat being harvested in Kansas. Kansas State University researchers have isolated and cloned a gene that provides resistance to wheat scab. | Download this photo.

MANHATTAN — Kansas State University scientists say they have isolated and cloned a gene that provides resistance to Fusarium head blight, or wheat scab, a crippling disease that caused $7.6 billion in losses in U.S. wheat fields between 1993 and 2001.

Their findings are published online in the journal Nature Genetics. The article details about 20 years of research that included scientists in China and several American universities.

"This has been a very difficult project," said Bikram Gill, university distinguished professor of plant pathology and director of the Wheat Genetics Resource Center at Kansas State University. He estimates that nearly 100 scientists, faculty, staff and students have participated in the work.

"The breakthrough that we're reporting is the cloning of a resistance gene," Gill said. "We have identified the DNA and protein sequence, and we are getting some idea of how this gene provides resistance to the wheat plant for controlling the disease. The cloning of this gene is the key to unlock quicker progress for control of this disease."

A disease that shows up periodically in more humid growing regions, Fusarium head blight caused severe damage in Minnesota and North Dakota in 1993 and subsequent years. Gill noted that a 1997 epidemic in Minnesota, which ruined 50 percent of the state's wheat crop that year, caused an estimated $1 billion in losses.

Fusarium head blight is caused by the fungus Fusarium graminearum, which produces a toxin that makes the crop unfit for human and animal consumption. James Anderson, a professor of wheat breeding and genetics at the University of Minnesota, said there are frequent epidemics of the disease reported in the United States, Canada, Europe, Asia and South America.

The fungus is also a menace to the barley industry. Gill noted that since the 1997 outbreak in Minnesota, malting barley is rarely grown in the upper Midwest because the industry implemented zero tolerance for the toxin Deoxynivalenol produced by fusarium.

Previously, the wheat variety known to best resist Fusarium head blight was a Chinese cultivar named Sumai 3. But while scientists knew Sumai 3 provided resistance, they didn't know what DNA sequence was responsible for resistance — until now.

"It's like searching for the proverbial needle in the haystack to find one clone that contained the resistance gene," Gill said.

"It looks like when the fungus attacks the wheat plant, the resistance gene protein has domains for binding and making pores in the cell wall of the fungus, and stopping it from spreading and infecting the developing grain," he said.

Traditional and molecular wheat breeding will benefit from the finding, Gill said. Without knowing the DNA source of this resistance, scientists would have to grow wheat in a field, hope for the right growing conditions to test new varieties against the disease, and then reproduce successful varieties for future years.

Instead, processes that would take years to replicate can be done in a fairly short amount of time in a diagnostics lab.

"An analogy I can think of is in the cloning of the most common gene that causes breast cancer," Gill said. "A woman can get diagnosed very early and be treated to avoid getting the cancer. We can do the same thing with this gene. Once you diagnose the plant, you can use it in breeding without exposing the plant to the disease."

Among several, Gill credited Anderson, whose research team has been working on resistance to Fusarium head blight since 1993 and was the first to genetically map the location of the gene to a small segment of the wheat chromosome. Anderson has worked closely with researchers at Kansas State University and Washington State University to help prove the identity of the resistance gene.

Gill also acknowledged Pumphrey, an associate professor in the department of crop and soil sciences at Washington State University, for his work leading to the discovery. Pumphrey was a graduate student at Minnesota under Anderson and later with Gill at Kansas State University.

The project was funded by the U.S. Department of Agriculture's Wheat and Barley Scab Initiative and the National Science Foundation. The agricultural experiment stations at each of the participating universities also provided support.

Kansas State University scientists have isolated and cloned a gene that provides resistance to Fusarium head blight, a crippling disease that caused $7.6 billion in losses in U.S. wheat fields between 1993 and 2001.