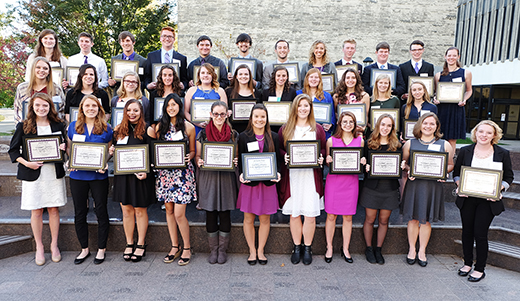 MANHATTAN — Thirty-four Kansas State University undergraduate students now have a special opportunity to fulfill their passions for animal health. The university's College of Veterinary Medicine accepted these students into its Early Admission Program at an afternoon ceremony Nov. 4 in Frick Auditorium in Mosier Hall.

Since being established in 1999, the Early Admission Scholars program has recruited the best and brightest undergraduate students who want to study veterinary medicine. After acceptance into the program, satisfactory completion of the 64 hours of preprofessional requirements, and at least three years of undergraduate work at Kansas State University, the scholars are guaranteed admission into the College of Veterinary Medicine.

"Qualifying for this program is very special," said Ronnie Elmore, associate dean for admissions and diversity programs. "These students represent the top 5 percent of Kansas State University students according to their college acceptance test scores. Being selected into the Early Admission Programs gives them the advantage of bypassing the regular applications process, which is very competitive. For only 112 positions in each incoming veterinary class, we usually receive more than 1,000 applications."

Successful candidates in the Early Admission Scholars program must maintain a 3.4 grade point average during completion of the preprofessional requirements. At the beginning of the third year of their undergraduate studies, these scholars may petition for enrollment in the first year of the Doctor of Veterinary Medicine degree program.

The College of Veterinary Medicine assigns a veterinary student mentor to each Early Admit Scholar to stimulate career and academic development and to provide orientation and access to college activities. The pre-veterinary students attend regular meetings during the academic year to develop a sense of community and share their progress.

The following Kansas State University students are members of the 2016 class of Early Admission Scholars: