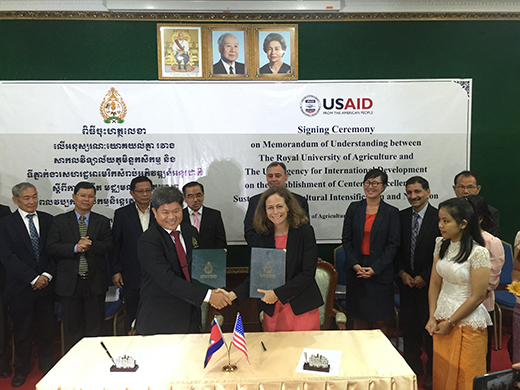 Officials from the Cambodian government, the U.S. Agency for International Development and Kansas State University recently signed a memorandum of understanding to establish the Center of Excellence on Sustainable Agricultural Intensification and Nutrition in Phnom Penh. Kansas State University will lead the $2.5 million project. | Download this photo.

MANHATTAN — Kansas State University has received a $2.5 million award from the U.S. Agency for International Development to boost agricultural innovation and growth in Cambodia, a country where 80 percent of the population is directly or indirectly involved in agriculture.

USAID's Cambodia mission made the award through the university's Feed the Future Innovation Lab for Collaborative Research on Sustainable Intensification, which was funded by USAID in 2014 to improve global food security by developing technologies that help farmers produce more food and nutrition on the same land base while protecting natural resources.

Vara Prasad, university distinguished professor of agronomy and the lab's director, said the award will be used to establish the Center of Excellence on Sustainable Agricultural Intensification and Nutrition at the Royal University of Agriculture, known as RUA, in Phnom Penh.

RUA is considered Cambodia's top agricultural university and is a key player for innovation and engagement with the public and private sector, as well as farmers.

"This award showcases Kansas State University's leadership in sustainable food production, both domestically and internationally," said John Floros, dean of the College of Agriculture, and director of K-State Research and Extension.

Manny Reyes, a Kansas State University research professor and agroecological engineer, will be the center's coordinator and work with RUA scientists.

"This center will tap into intellectual capital from scientists around the globe, especially the United States, to research, teach and extend science-based innovative technologies to poor farmers, especially women and youth," Reyes said.

Other U.S. universities and Feed the Future innovation labs will work together to develop technologies that improve Cambodian horticulture, integrated pest management, livestock systems and aquaculture.

"No single university can address future challenges by itself," said Ngo Bunthan, rector of RUA. "In this era of globalization and interdependence, cooperative partnerships with other institutions of academic excellence around the world are not an option, but a necessity."

At a ceremony to launch the center, William Heidt, the U.S. ambassador to Cambodia, said there is room for Cambodia's agricultural sector to grow further and become more competitive in the region and the world.

"Cambodia has the potential to be an engine for economic growth, rural development and to strengthen global food security," Heidt said.

The project also includes establishing five technology parks in agro-ecological zones of Cambodia. The techno-parks will showcase promising strategies and innovations that could benefit smallholder farm production and encourage interaction between the private sector, researchers and farmers.

Kansas State University has received $2.5 million from the U.S. Agency for International Development to boost agricultural innovation and growth in Cambodia, a country where 80 percent of the population is directly or indirectly involved in agriculture.