MANHATTAN — A Kansas State University history professor is a winner of the Midwestern History Association's prestigious Hamlin Garland Prize, which is awarded to projects that represent the best in popular history writing about the American Midwest.

James Sherow, a professor of history who has taught and researched at Kansas State University for more than 20 years, received the award with John Charlton for their book "Railroad Empire Across the Heartland: Rephotographing Alexander Gardner's Westward Journey." The award was presented Oct. 21 at the annual meeting of the Midwestern History Association in St. Paul, Minnesota.

Charlton is a retired photographer for the Kansas Geological Survey at the University of Kansas.

"Railroad Empire Across the Heartland: Rephotographing Alexander Gardner's Westward Journey," which was also named a 2015 Kansas Notable Book by the State Library of Kansas, was published by the University of New Mexico Press. Gardner was a noted Civil War photographer who also documented the construction of the Union Pacific Railroad across Kansas, which started in 1867. In their book, Sherow and Charlton look at how the landscape has changed in the nearly 150 years since the railroad's construction.

"I'm truly excited to receive the Hamlin Garland Prize," Sherow said. "As an academic historian, I'm delighted to see my work recognized for its appeal to a broad public audience."

He also has published four book chapters and 17 refereed articles. His teaching and research interests are environmental history, Kansas history, North American Indian history and the history of the American West. He also is the managing editor of Kansas History: A Journal of the Central Plains. He is currently completing his next book, a history of the Texas cattle trade and the Chisholm Trail.

He is actively involved in public history and historic preservation and served for 10 years as the governor-appointed Kansas historian on the Kansas Historic Sites Board of Review. He also has served as mayor of the city of Manhattan.

The history department is in the College of Arts & Sciences. 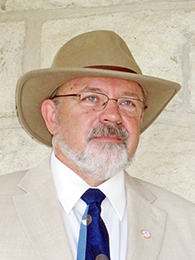