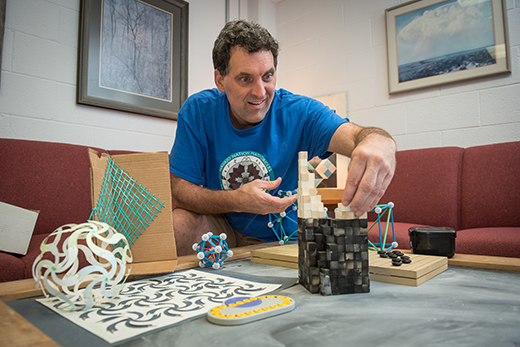 David Auckly, professor of mathematics at Kansas State University, is the co-founder of the Navajo Nation Math Circles Project, which provides mathematic activities and opportunities for K-12 Navajo students in the American Southwest. | Download this photo.

David Auckly, professor of mathematics at Kansas State University, and Tatiana Shubin, professor of mathematics at San Jose State University, co-founded the Navajo Nation Math Circles Project to provide mathematic activities and opportunities for K-12 Navajo students in the American Southwest. The project not only helps participants excel in their current grade level, but also prepares them for higher education and math-related careers.

The project is featured in the documentary film "Navajo Math Circles," which is airing nationwide in September on the Public Broadcasting System. Some of the project activities will appear in a book that is due out mid-2017.

"It's a privilege to participate in the festivals and the camp, where we share ideas and build a great community of people," Auckly said. "It's always nice to share something you love — in this case, mathematics. It's a real pleasure to interact with the students."

The project provides mathematical explorations that do not require much background knowledge. Instead of paperwork problems, the project employs such tools as dice, Rubik's Cubes and puzzles involving traditional Navajo culture to help students discover patterns, develop persistence and learn math in a low-stress, grade-free environment.

"Realizing you can keep playing without immediately finding the answer is a very important skill for any problem or activity in life, and it's one of the themes students learn in our activities," Auckly said. "If a math teacher inspires kids to play with a math puzzle on their own because they're interested and having fun, or a student tells someone about this cool math thing they've learned, that changes everything."

Despite the challenges, the program is seeing students succeed, especially as high school participants advance to higher education. The program provided its first scholarship last year to a three-year participant, who is featured in the documentary.

The film has provided several students with the occasion and resources to travel for screenings and events, including visits to Washington, D.C., and New York City.

"Without the Navajo Math Circles Project, these students would have no awareness of the kinds of opportunities that can be theirs in science, technology, engineering or math," Auckly said. "Our program helps participants think new things, like that they could pursue and be successful in a math-related career."

The National Science Foundation and the National Security Agency provide the majority of the funding for the Navajo Math Circles Project. Math associations and university colleges, including Kansas State University's College of Arts & Sciences, comprise a patchwork of funding so the project can continue educating students in an underserved population.

Also at Kansas State University, Natalia Rozhkovskaya, associate professor of mathematics, started a math circle program in 2010 that is open to the community and includes younger students in Manhattan. 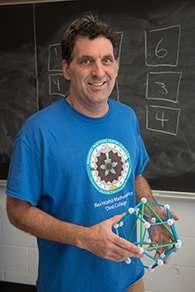 David Auckly, professor of mathematics at Kansas State University, is the co-founder of the Navajo Nation Math Circles Project, which provides mathematic activities and opportunities for K-12 Navajo students in the American Southwest.