MANHATTAN — Three Kansas State University alumni who lead institutions of higher education will take part in a special Landon Lecture panel discussion on issues in higher education today. The event, which is free and open to the public, will be at 10:30 a.m. Monday, Sept. 26, in Forum Hall at the K-State Student Union.

Panelists will be Lt. Gen. Robert L. Caslen Jr., superintendent of the U.S. Military Academy at West Point; David Hall, president of the University of the Virgin Islands; and Bud Peterson, president of the Georgia Institute of Technology. Panel moderator will be Mará Rose Williams, education reporter for the Kansas City Star.

"We're excited to bring these distinguished K-Staters to campus for a look at higher education from individuals who are so deeply involved with its challenges every day," said Jackie Hartman, the university's chief of staff, director of community relations and chair of the Landon Lecture Series.

A 1989 Kansas State University master's degree graduate in industrial engineering, Caslen has served as the 59th superintendent of West Point since July 17, 2013. Before taking his current post, he was chief of the Office of Security Cooperation-Iraq. Among his prior deployments and assignments include serving as the commander of the Combined Arms Center at Fort Leavenworth, the command that oversees the Command and General Staff College and 17 other schools, centers and training programs located throughout the United States; and commanding general of the 25th Infantry Division (Light) and commanding general of the Multi-National Division-North during Operation Iraqi Freedom. His awards and decorations include the Defense Distinguished Service Medal, the Bronze Star Medal with two Oak Leaf Clusters, the Defense Meritorious Service Medal, and many others. More information about Caslen is available at http://bit.ly/2anKav4.

Since becoming the fifth president of the University of the Virgin Islands on Aug. 1, 2009, Hall has worked to raise the image and position of the university. He led efforts to restructure academic units from divisions to colleges and schools, the addition of new academic programs and the launch of the new Caribbean Center for Green Technology, a Center for the Study of Spirituality and Professionalism, and an Institute for Leadership and Institutional Effectiveness. Hall earned a bachelor's degree in political science in 1972 from Kansas State University, where he was named an Academic All-American as a member of the men's basketball team. After playing professional basketball in Italy, he went on to earn his law degree from the University of Oklahoma. He also earned a doctorate in judicial science from Harvard Law School. More information about Hall is available at http://bit.ly/2aHL2K5.

As the 11th president of the Georgia Institute of Technology, Peterson oversees a top 10 public research university with more than 21,500 students and $730 million in research expenditures. He has served as president since April 1, 2009. Peterson earned a bachelor's degree in mechanical engineering in 1975, a bachelor's degree in mathematics in 1977 and a master's degree in engineering in 1980, all from Kansas State University. He earned his doctorate in mechanical engineering from Texas A&M. Peterson has been active in helping establish national education and research agendas. President George W. Bush appointed him to the National Science Board in 2008, and President Barack Obama reappointed him in 2014. The board oversees the National Science Foundation and advises the president and Congress on national policy related to science and engineering research and education. More information on Peterson is available at http://b.gatech.edu/1BExTfI. 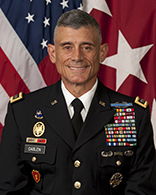 David Hall, the president of the University of the Virgin Islands 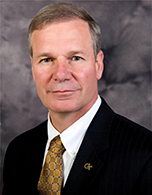 Bud Peterson, president of the Georgia Institute for Technology

Three alumni of Kansas State University who are leaders of institutions of higher education will take part in a Landon Lecture panel presentation about issues in higher education. The event, open to the public, will be at 10:30 a.m. Monday, Sept. 26, in Forum Hall at the K-State Student Union.