"Adm. Haney is one of the nation's most respected officers and we're pleased he has accepted our invitation to be part of the prestigious Landon Lecture Series," said Jackie Hartman, the university's chief of staff and director of community relations. "Under the admiral's leadership, the U.S. Strategic Command is responsible for the global command and control of U.S. strategic forces to meet decisive national security objectives, providing a broad range of strategic capabilities and options for the president and secretary of defense."

The U.S. Strategic Command is one of nine unified commands under the Department of Defense.

He also commanded Submarine Group 2 from October 2006 to March 2008, and Submarine Squadron 1 from June 2002 to July 2004. Along with serving as commander of the submarine USS Honolulu, his other at-sea assignments include Submarine Squadron 8, USS Asheville, USS Hyman G. Rickover, USS Frank Cable and USS John C. Calhoun.

Adm. Haney's shore duty tours include serving as director of the Naval Warfare Integration Group and the Submarine Warfare Division. He was deputy chief of staff of plans, policies and requirements for the U.S. Pacific Fleet; served as congressional appropriations liaison officer for the Office of the Secretary of Defense; and administrative assistant for enlisted affairs at Naval Reactors.

He has received the Navy Distinguished Service Medal twice and the Defense Superior Service Medals twice; the Legion of Merit four times; the Navy Commendation Medal three times; the Navy Achievement Medal twice; and several other campaign and unit awards. He also was the recipient of the Vice Admiral James Bond Stockdale Leadership Award in 1998.

Scheduled to deliver a Landon Lecture in the spring is Martin Baron, executive editor of the Washington Post, who will speak at 10:30 a.m. Thursday, April 7, 2017, in Forum Hall. 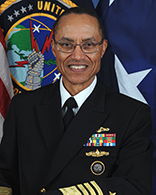