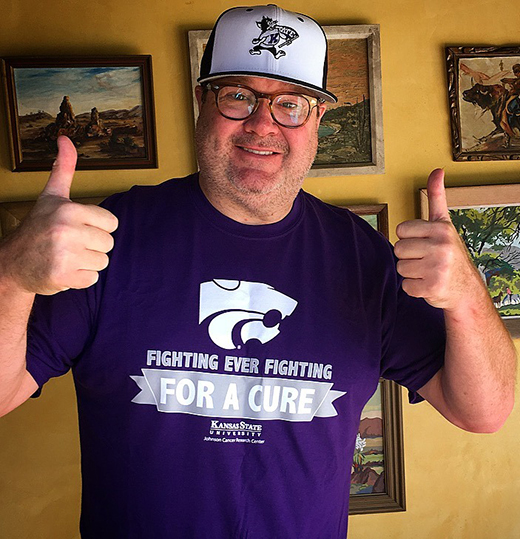 "Cancer research is near and dear to my heart because, like so many others, it's touched my life," said Stonestreet, referring to his mother's and other family members' battles with the disease.

Stonestreet's gift will immediately advance collaborative research being done by two chemistry professors to develop a technology to detect cancers at their earliest stages, when they are more likely to be curable.

"Thanks to Mr. Stonestreet's support for our prototype development, we will be able to better compete for federal funding so that we can test our device with clinical samples," Culbertson said.

"It's an exciting time in cancer research and I'm proud to be able to contribute in some way to the good work being done at the Johnson Cancer Research Center at K-State," said Stonestreet, who won the Emmy Award in 2010 and 2012 for outstanding supporting actor in a comedy series. "I encourage all K-Staters to take a look at the research being conducted at K-State to help make cancer more detectable, more treatable and more survivable, and to support this important work however you can."

"We're so grateful for Mr. Stonestreet's generous gift," said Rob Denell, director of the Johnson Cancer Research Center and university distinguished professor of biology. "Gifts like this can really propel early, promising work toward the ultimate goal of conquering cancer."

The Johnson Cancer Research Center supports and advances cancer research at Kansas State University, helps train future researchers and informs the public about cancer and risk reduction. All of its programs are made possible by private donations. Information about the center is on its website, cancer.k-state.edu.

The university's chemistry department is part of the College of Arts & Sciences.

"It's an exciting time in cancer research and I'm proud to be able to contribute in some way to the good work being done at the Johnson Cancer Research Center at K-State." — Eric Stonestreet, Emmy Award-winning actor